With God, Peace, And Laughter Hamsley Is In The Pink & Cancer Free

Psalms 31:25 (NLT) states  “She is clothed with strength and dignity, and she laughs without fear of the future.”  Pam was strong and she laughed and peace brought her  dignity.

In November of 2007, Dooly County resident Pam Hamsley discovered what no woman wants to find, a lump. Because of a former history of cysts, she chose not to be too concerned. “It’s just another cyst,” thought Pam, and she waited to see if it would pass as others had done in the past.  It didn’t and when the lump began to feel hard, she set an appointment to see a doctor.

Preliminary reports strongly indicated breast cancer, and immediate action was taken to schedule a biopsy and other tests.

Pam consulted with a surgeon the very next day, and a biopsy was scheduled right before Thanksgiving.  Pam would be spending the holidays with family and chose not to let the situation dampen her spirits.  She chose to have a peaceful time and enjoyed a wonderful Thanksgiving with them.  The following Monday, results were in.  Breast cancer was confirmed, but even more alarming was that she was already between Stage 3 and Stage 4.

Pam had more tests and began meds and shortly before Christmas, a chemo port was inserted.  Chemotherapy treatments began and would continue every three weeks.  She also took a weekly dose of Herceptin. 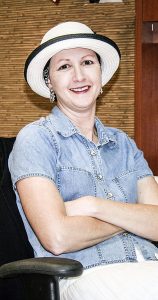 After her first round of chemo, Pam’s hair began to thin, and after the second round, she made a decision to shave her head and gave her husband, Roy, the task.  Pam had beautiful, silky, sandy blonde hair and when the locks fell, so did her tears.  Pam made a decision not to wear a wig.  Instead, she opted for colorful scarfs and stylish hats.  Her co-workers looked forward to seeing what Pam would be wearing on her head each day.  This brought more fun and laughter into Pam’s life.

During Pam’s fight with cancer, she retained a strong inner peace and was not fearful. She knows her Savior Jesus Christ and was not afraid.  She chose to have all her treatments at The Cancer Center in Hawkinsville, Georgia.  It would be convenient for her as her employer, ComSouth Telecommunications, was also located in Hawkinsville.

Pam’s attitude towards her cancer was comical at times, and she always looked towards the positive side.  She related about how the surgeon who performed her biopsy was from Cordele, Dr. Michael Thompson, and that he was young and handsome.   “His looks certainly did help things,” Pam joked.

Pam loved keeping her treatments local, and the staff was very good to her.  She also met two other women at the center, who were also battling breast cancer.  They, too, were from Dooly County, and the three women struck up a relationship.  They had good times together and laughed together.

In May 2008, Pam’s chemo treatments ended and a decision was made to perform a mastectomy and begin radiation, which she had five days a week for six weeks. Pam was progressing well in her fight against cancer.  She was in great shape before the diagnosis and while on chemo, she made herself eat well, even when she had no appetite.  “I knew I had to keep up my strength for all this.  In fact, I’m the only one I know who gained weight during chemo.” she laughed.

Except for taking a daily pill, all was looking good for Pam, but six months later, she discovered another lump in her other breast.  Immediate removal of that breast was recommended and performed.

Today and eight years later, Pam Hamsley is alive and well and thriving. She had a successful dual-breast reconstruction surgery, and her hair grew back, but not as before.  It grew in gray and curly.  She laughs about it, and she’s very thankful to God for it.  She’s also thankful for the growth in Him, the peace He gave her, the medicine of good laughter, and the strength He gave her throughout the entire ordeal.

At the time, Pam attended Double Branch Freewill Baptist, and her church family was instrumental in helping her to overcome many trials.  Her employer, ComSouth, was very understanding, supportive of her, and her co-workers were “the best!” She felt very blessed to work for ComSouth.  Last, but far from least, Pam related that she was especially thankful for her husband Roy, who was very attentive, loving, and caring.  Pam said, “He was the best nurse anyone could ever have.”

Pam remains at peace and wants others facing breast cancer to “never give up hope.”  She encourages all women to get an annual pap smear and breast exam.  She also stresses the importance of self-examination and checking under the arms.

Moving forward, Pam doesn’t concern herself with thoughts of cancer returning, because… “she is clothed with strength and dignity, and she laughs without fear of the future.”