The Wilcox County Patriots played their final home game of the 2016 season on Friday night when they hosted the Turner County Rebels.

The Patriots received the kickoff to open up the game, but they were not able to get anything going and were forced to punt. Turner took over and began to drive down the field but their drive was stalled when Markese Love intercepted a deflected pass to give Wilcox possession at their own 20-yard line around four minutes into the first quarter.

The subsequent drive for Wilcox looked to be promising until they were forced to punt after driving to midfield and stalling. After a decent return, it took the rebels just three plays to open up the scoring on a short run from the one-yard line. Patriot linebacker Larry Pierce was able to break through and block the ensuing extra point attempt to keep the score at 6-0 in favor of Turner with just under four minutes left in the first quarter.

Things only went downhill from there for Wilcox. After forcing another punt, the Rebels drove 53 yards on seven plays to score their second touchdown of the game on a 10-yard pass from Tyler Moore to Jarvis Hall. The score gave Turner a 13-0 lead at the end of the first quarter.

The second quarter saw the Rebels tack on four more touchdowns. Two on interception returns by Ontario Wilson, one on offense and another on a punt return by Wilson. Turner led at the half 39-0.

The Patriots came out in the second half and showed some solid effort despite the numbers on the scoreboard. They scored their only points of the night using a 14-play drive that spanned 70 yards and they capped it off on a 10-yard touchdown pass from Landon Ledford to Robert Bishop. The Wilcox touchdown made the score 39-6 in favor of the Rebels. Turner scored three more touchdowns before the end of the game to make the final score 59-6.

Wilcox County will travel to Atkinson County Friday night for their final game of the season. 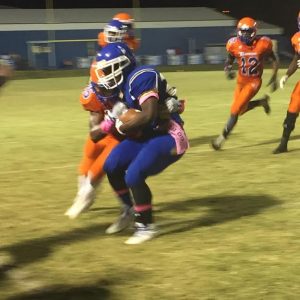