Laura Lee Keene threw a shutout, but it wasn’t enough to carry the Wilcox County Lady Patriots to a win on Thursday, as the Patriots fell to Gordon Lee 1-0 in eight innings.

After going to the international rule to break the tie. Gordon Lee scored in the 8th inning on a single. Haley Howell had two hits for Patriots. The Lady Patriots dropped into the losers bracket and were forced to fight all the way through the brackets. Next up on Friday was Mt. Zion whom the Lady Patriots dispose of in a 2-1  7 inning contest. Autumn Tripp went the distance for the Lady Patriots striking out 4 and scattering 7 hits. In the thriller that was the Glascock game Chastity Stephens pitched  5 innings of hitless and scoreless ball while striking out 6. She was relieved by Laura Lee Keene who finished the last two innings with 2 k’s and no runs in the Wilcox 1-0 win. On Saturday the Patriots would face old nemesis Telfair County who had beaten them twice this year in region play. The Ladies Patriots Keene and Tripp teamed up for an 8-1 victory and an advancement to play Gordon Lee one more time. Keene went the distance  and was saddled with the loss in a 3-1 decision. Keene struck out 4-walked 1 in the loss. For the weekend the girls hit production was led by Keene and Oakleigh Reeves who both had 5 hits . Haley Howell gathered up 4 hits. The Griffin girls Marquetta and Marteisha Griffin joined Montana Ellis with 3 hits each. Tripp got a pair of safeties and the Fuller sisters Megan and Michelle both collected a wrap for the weekend.

“We just didn’t get the big hits when we needed them against Gordon Lee,” said Head Coach Stephen McDuffie. “ We went head to head against the AA defending state champs in Gordon Lee and we got outstanding pitching and defense as we only gave up six runs in 5 games, we just didn’t get the timely hit. What a great year we had, I am so proud of these girls and we are going to sorely miss our seniors next year,” Mcduffie added. 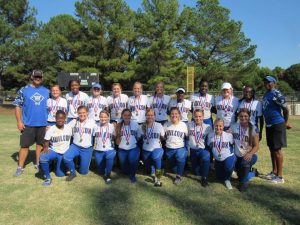