You could cut the atmosphere in Worth County with a knife. The host Worth County Rams were absolutely prepared for a battle against the mighty Crisp County Cougars and their 9-0 record. The stadium was packed with people adorned in black attire in an attempt to give an illusion of a total blackout on the Cougars. UH Naw ain’t happening !!! The Cougars rolled into Sylvester just like a juggernaut of Blue and Gold and smashed that small window of hope and courage the Rams had mustered. The 28-20 Cougar victory moved Crisp County just ahead of Worth in their all time series. The Cougars are now 20-19 against the Rams.

This victory was even more significant in that the Cougars moved to 10-0 on the year. The first undefeated season in 36 years. The first region title in 21 years. They are now sitting pretty to host some playoff games as well. Can anyone spell DOME?? Yes the Cougars are off to a great start in that march towards history.” I am very happy for the whole team, the coaches and for the fans of Crisp County this region title belongs to us all but we still got work to do,” said Head Coach Shelton Felton. ‘Worth is a good team and they did as we expected put up a fight and we made some mistakes but the boys never quit.”

Everyone from Crisp County new the night was going to be exciting when on the very first play of the Crisp County’s Patrick “Nino” Felton threw a 70 yard bomb down the Worth County sideline to TJ Ming for a Cougar Touchdown. Brandon Thompson added the PAT and the Cougars were up 7-0 with only 11 seconds gone off the clock.

Jammie Robinson would rush for 2 more Cougar touchdowns from 7 yards out and 11 yards out and after Worth scored a touchdown and a field goal the Cougars led at halftime 21-10. The Cougars would get the ball in the second half and march down the field for one more score as Felton rambled for a lot of yards and finally punched the ticket from about 5 yard out, Thompson was again good on all PAT’s and

the Cougars were up 28-10. Worth scored another touchdown and kicked another short field goal to pull within 8 points. The Cougars missed on a 47-yard field goal attempt that hit the crossbar. The Cougar defense was very stout in containing the Rams wing T offense that they run so well. In the end Crisp County prevailed. It appears that the Cougars will most likely host Islands High school from Savannah in the first round of state next Friday in the “DEN” at 7:30pm. Either way the Cougars are the #1 seed and will be home next Friday regardless who they play. As a Fan of Cougar football to all the players and coaches of Crisp County, we all want to say thank you for all your hard work! “ GO COUGARS” “ Ain’t nothing like being a Cougar on Friday night.” 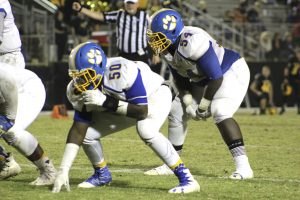 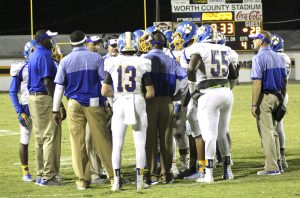