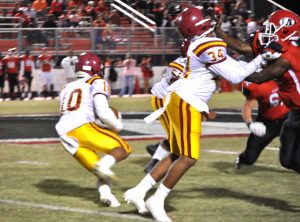 Dooly moves to # 12 in power rankings

The Dooly Bobcats wasted little time Friday night in disposing of rival Marion County by a score of 47-13. Even without the aid of their star quarterback Bo Lawson the Bobcats were a scoring machine. The victory pole vaulted Dooly all the way to #12 in the Single A power rankings and also allowed them to host the first round of state in the “Grove” Friday night against Irwin County.

“I am very proud of our effort after starting out 0-3 against really good competition we bounced back and started winning,” said Jimmy Hughes the Bobcat head mentor.

The Bobcats started off the scoring bonanza with 8 yard run by Stevie Rhodes. Then within a minute Dre Lawson intercepted a Marion County pass and set up a 29 yard burst by Andre Robinson for another Bobcat touchdown. Juan Gonzalez missed that PAT on a bad snap and hold and the score was 13-0. After another series the Bobcats got the ball drove down and John Clayton busted through on a 2-yard plunge and with a good PAT by Gonzalez the score was 20-0 in the 1st quarter. Marion County did manage a score during all this on a slip up by Dooly to make the score 20-7. Them Bobcats just kept punching away and Rhodes scored again on a 6 yard run. Then after kicking off and holding Marion County and forcing a punt Robinson returned a punt 49 yards for another Cat touchdown and the halftime score was 33-7.

After literally blistering Marion in the first half Dooly came back out and Stevie Rhodes again hit pay dirt on 14-yard scamper, the PAT was good and the Cats were sitting up 40-7. The Eagles managed another score before Qua Lowe capped off a Dooly drive with 2 yard run and the final stood at 47-13. The Bobcats finished their regular season at 6-4 and are the highest ranked of all four-loss teams going into the playoffs. Their strength of schedule and quality wins was very high. All four losses were to playoff teams and two of them were much bigger schools like Crisp and Americus. They had quality wins over AA Dodge County in Eastman and Hawkinsville and Marion were also both on the road. The Cats host a talented Irwin County squad who will also check in Friday night with a 6-4 record.