Wilcox Season comes to an End

The Wilcox County Patriots ended their season Friday night in a 33-23 loss to Atkinson County. After spotting the Atkinson County  13 points in the 1st quarter they came roaring back. First up for patriots was #1 Markese Love who busted a long run of 71 yards and the PAT by Landon Ledford was good putting the score at 13-7. The Rebels came right back and scored a minute later on a 25 yard pass to make the score 19-7. The Patriots got a 30 yard field goal from Ledford to make the score 19-10 at halftime. With 5 minutes to go in the 3rd quarter Atkinson scored again to move up 27-10. After a Wilcox touchdown was called back the score remained  27-10 till 3 minutes were left in the game. The Rebels  got another score from 11 yards out and now had a commanding lead. That is until Ledford dropped back and hit #2 Elijah Howard on a 67 yard strike for a touchdown and the PAT by Ledford was good. And the score was 33-17. After getting the ball back Ledford again found an open target in #6 Antonius Putman on a 35-yard touchdown pass and the final score was 33-23. “I am proud of the effort the guys put forward tonight they have fought hard all year,” said Head Coach Mark Ledford. “ We are going to miss this great group of seniors.”The Patriots have been without a number of starters  all year. 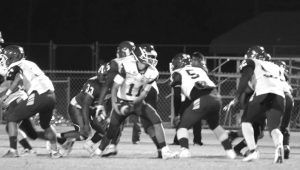