It was “Shark” week in Cordele only it wasn’t a TV show it was the Island Sharks football team out of Savannah and the fishing was good!

Next week should be a better game, because this week was nothing but a Cougar beat down. The Crisp County Cougars pounded Islands High School out of Savannah       Friday night 42-0 in the “DEN”. The Cougars improved their record to 11-0 for only the second time in school history. In front of a sellout crowd the Cougars moved up and down the field at will and their defense simply stifled the “Sharks” offense. The Cougars now advance to the sweet 16 in state play.

The Cougars got the scoring started in the 1st quarter with a 1-yard plunge by Patrick Felton. Next score was 2 yard tote by DE ‘Angelo Griffin and after the two Brandon Thompson PAT’s the score was 14 -0. In the second quarter Crisp got the ball and drove down for a Jammie Robinson 13 yard scamper and the Cougars were up 21-0. The Last touchdown of the half was a doozey a 68-yard cruise missile strike from Felton to TJ Ming who cruised in to the end zone and the Cougars led 28-0.

The Third quarter got started just right as Brandon” get err done” Dowdell got his 7th interception of the year and his second pick six, a 38 yarder. When it rains it pours and the Cougars recovered  the kick off and Robinson scored from 14 yards out to make it 42-0. After this point the Cougars were playing underclassmen and they put up the goose egg we have been waiting on. “I am happy with win but we gotta get ready for next week and Lovett who comes to visit,” said Head Coach Shelton Felton.”We  going to take them one at a time.” 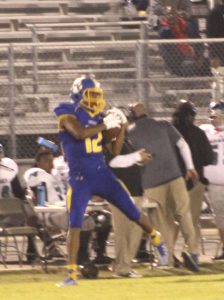 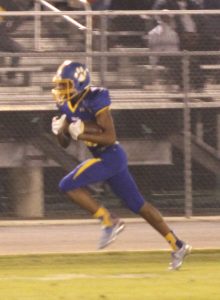