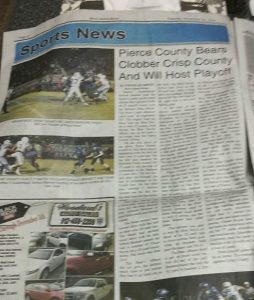 The excitement Friday night was ecstatic and the “Den” was over flowing with fans. The former Crisp County Coach Sean Pender brought his 2016 edition of the Pierce County Bears into the “Den” with the number one ranked offense in AAA ball in Georgia. This game was never even close! Cougars won 56-21. Even after last week and the Pierce Press publication of that article that said how they had beaten us really bad, well wow! That just never came to fruition. Yes that is right they published a newspaper with a full column written about beating Crisp County, the headline read “Pierce County Bears Clobber Crisp County and will host the Playoff.” What a Boo Boo.

The Cougars dominated this game in every facet and a complete account of the game will appear in Wednesday edition of the Dispatch. As for now the Cougars will host Cedar Grove in the “Den” on Friday night in the state semi finals.