Third Time is a Charm

The old saying third time is a charm is in play this week. In the history of Crisp County Football dating back to 1957, Crisp has been to the state semi-finals 2 times once in 1981 and another in 1995 both times the Cougars fell, first to Waycross 13-7 and then to Cedar Shoals 27-24. The 2016 edition of the Crisp County Cougars have already set records going 13-0 for the first time ever and the most points as far as I can tell that’s ever been scored in one year (470 and 36.15 avg).

So there you have it the Crisp County Cougars forever a bridesmaid and never a bride, that is until now!! As the old saying goes “the sun is going to shine in everyone’s backyard one day.” Today is that day. So right now we going do a little bragging on our team. The boys themselves won’t be doing any of it they are focused on football. My playing days ended many many years ago and I feel like talking about my team just a little bit so indulge me.

The mighty Cougars on Friday night sent a statement to the rest of the state that the road to the dome and a state crown has been detoured through Cordele. As for Max Preps and the AJC and all the other prognosticators around the state, yall have had us sitting back around 6th through 4th all year, even though we are the only perfect team so far.

I do a little of that so called prognosticating myself and yall don’t know what you are talking about. I know and so does the rest of this county that any team can lose on Friday night, it is all about catching breaks. Crisp nearly lost to Lovett on account of some of them “breaks” but guts and determination and a never quit attitude propel them past the Lions and into the quarterfinals against Pierce. Now after dismantling the Bears we have to listen to more trash talk about the size of Cedar Grove’s line how tall their Quarterback is and how he can sling it. Well zippidy de do da day. Them Cougars got a big old line that eats meat and dips it in “Saints” sauce. We got receivers that fly down the field like F-18 Raptor jets. We got a running back that moves like a gazelle and a buffalo combined. We got two not one two quarterbacks and they have no envy of the other just support (grown ups could learn a lot from them two). Our poor punter can kick it fifty yards he just doesn’t get to very often. Our field goal kicker nicknamed “frosty” for the ice in his veins can save a game for you in the clutch. Our defense has gotten better and better every week this year and now they put fear in the eyes of opposing offenses. “Big Cat” and Quay Walker are enough worry the horns off a Billy goat. Our coaches have improved their game as the year has moved on and now they are proving that they are an elite staff.

So what does all that mean? Well put this in your pipe and smoke it, The  “Saints” may come marching in but they will be crawling out come Friday night. This is the Year of the Cougar and we going to the dome!

Now for the results from Friday night. The Cougars kicked off and after a few minutes the Bears punted to Crisp. The Cougars marched down the field and with 5:53 left in the 1st quarter “Neno” Felton trolled in from 12 yards out and the PAT by “Frosty” Thompson was good and the Cougars led 7-0. After kicking off to Pierce, the Cougars forced a fumble on the next play that saw Quay Walker

scoop it up and ramble 24 yards into the end zone the PAT by Thompson like all of the PAT’s was good the score stood at 14-0 with 5:37 to go in the 1st quarter. After getting the ball back from Pierce with 2 and half minutes to go in the 1st stanza, Felton hit “dangerous get err done” Brandon Dowdell on a 25 yard strike that made the score 21-0 with1:05 to go in the quarter. Pierce County and their “number one in Georgia” offense finally began to move the ball with the help of some penalties before stalling out.

The Cougars took control and moved quickly down the field when#6 Jammie “sweet legs” Robinson carried the ball in from a yard out and the score in the den was 28-0. Pierce completed a few key passes which culminated in a 7 yard pass for a touchdown, the PAT was good the Bears were finally on the board with 43 seconds to go in the half. Well that was just enough time for Crisp to move down the field and Felton hit DJ Smith on beautiful over their head bomb and the score was now 35-7 at halftime. Starting off the second half ‘Sweet Legs” Robinson busted another long one for 44 yards that made the score 42-7. It was at this point that the Bears began a long drive moving at will it seemed against the Cougars as time was called. After a discussion of sorts with Coach Felton the Pierce drive stalled at the 14-yard line. The Cougars drove the length of the filed and Daevion Troup piled into the end zone on a two yard run to make it 49-7. Pierce would take the ball and travel down the field where they scored on a 23-yard pass for a touchdown and now the score stood 49-14.  The Cougars would get one more into the end zone with 10:03 to go in the game Robinson broke yet another long 40 yard run to go up 56-14. Then finally with the underclassmen in Pierce through a long bomb from 33 yards out to score again with 15 seconds to go in the game.” You know I am very proud of my kids they are still getting better and they accept challenges like taking on the #1 offense in Georgia, “ said Head Coach Shelton Felton. “The defense just gets passionate about playing.” 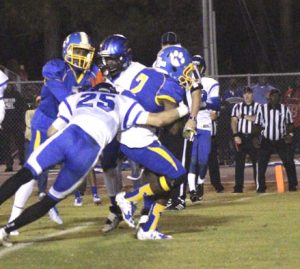 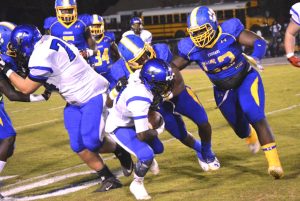 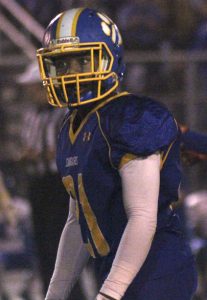 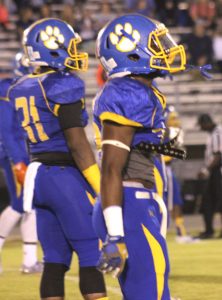 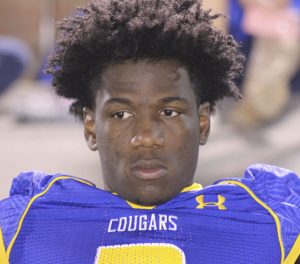 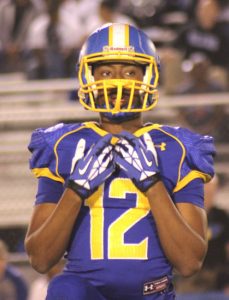