Dooly County Undefeated Back to Back State Champions

The Dooly County 8U Bobcats won the GRPA Class C State Championship on Saturday finishing their season undefeated at 14-0.  The Baby Bobcats were the Flint River League Champions, Post Turkey Bowl Champions, District 3 Champions, and now Back-to-Back State Champions.  “Winning Back-to-Back State Championships in football is a tremendous accomplishment, and it’s something these kids can be proud of for the rest of their lives.  I’m so proud of this group of kids and coaches for all of the hard work we have put in for over four months.  We had a core group of kids that returned from last year’s State Championship team, and it resulted in a magical season” said Owens.  Our MVP on the offensive side of the ball was Jardarius Fedd, who scored 42 touchdowns on the season.  Joseph Owens had a great season passing the ball and running the offense at quarterback.  The entire offensive line returned from last year’s state championship team – Quintez Alexander, Terence Collier Jr., Garlan Godfrey, JaCambrian Dawson, and Amaji Felton, and they were the strength of the team.  The defense played lights out all season long and made it almost impossible for opponents to score.  I want to thank all of the coaches, Brent Owens – Head Coach, Martavius Brown – Defensive Coordinator, Johnny Fedd, Jr.  Tyronski Felton, Chad Chadwick, and I also want to send a special thanks to the Recreation Director Jacob Joiner for all the work he does for the children of Dooly County. 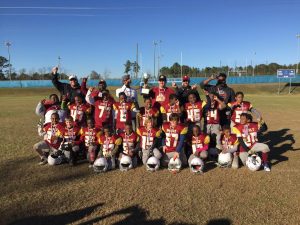