Cordele Boy Scout Troop 270 held its December campout on property leased by Mr. Mark Olds on December 10-11, 2016.  The boys found plenty to do during the overnighter.

Mr. Olds invited the Troop to campout a couple of months ago.  His grandson Jake Olds is a member of the Troop.  The Scouts left the Cordele Boy Scout Hut a little after 9 am on Saturday morning, arriving at the horse farm about 9:30.  It was a cool day, with temperatures ranging from 26° in the morning to 55° in the afternoon.

The boys quickly set up their camp, then jumped into the fun.  Several of the boys headed straight to one of the fish ponds on the property and dropped in a line.  Others walked around to the horse corral for some riding lessons.  The boys broke for a lunch of soup and sandwiches about 2 pm, then headed back to their casting and riding.  The biggest fish caught was about an 8 pound bass.

As night fell, the boys began stoking the fire in the fire pit.  The early part of the evening was spent in a spirited game of Capture the Flag.  Afterwards, the boys made hobo burgers (hamburgers cooked on the coals along with various vegetables in aluminum foil), washed down with Gatorade.  The rest of the evening was spent talking around the fire pit.  About 10 pm, everyone had experienced about all of the fun they could stand and headed off to their tents or hammocks.  Though the temperature dropped to 38°, most of the boys said that they slept well.

Up about 7:30 am, a short time was spent standing around the rekindled fire before the boys prepared a breakfast of bacon, eggs, and biscuits.  Following breakfast, Life Scout Brandon Nipper led a Scout’s Own religious service, which included music and readings.  By 11:30, the Troop had cleaned up, packed up and was headed back to Cordele.

Troop 270 is sponsored by the Cordele First United Methodist Church and meets every Monday evening at 6:30 in the Cordele Boy Scout Hut on the corner of South 3rd Street @ 21st Avenue.  If you know of any boy ages 11-17 who may be interested in becoming a Boy Scout, please have him come by the Boy Scout Hut on Monday evening or contact Scoutmaster John Frost, owner of Brady’s Best Buys, for information. 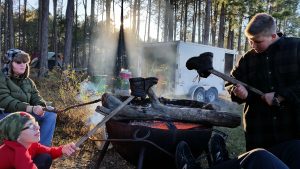