The Crisp County Cougars won 76-65 over Cook County in the recent Christmas Tournament and 67-51 over Bacon County as well. There were no stats available for these games. The two wins put the Cougars at 6-6 on the year as they prepare for their all important region schedule.

The Crisp County Lady Cougars won their first game of the year, blistering a Chattahoochee County squad 67-17 in the Turner Christmas Tournament. The win puts the Lady Cougars at 1-11 on the season. The Cougars were never even threatened in the game, as it was a complete mismatch. The lady Cougars were led by Chadaya Miller and Riley Blampied who both tallied 16 points apiece. The Cougars dominated the boards with 42 rebounds and also had 15 steals, 6 assists and 16 Turnovers. The ladies shot 46% from the floor and 64% from the line. The boys and girls teams travel to Perry on January 3rd to take on the Panthers starting at 6:00pm. 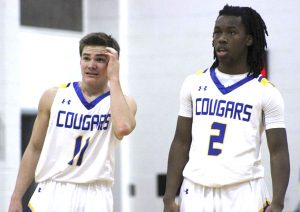 Seniors Austin”Boo Boo” Walls and Ijon Owens seem to be a little perplexed, either by the size of the player they are up against or the call that was just made.

Don’t get your hopes Up