Do you remember when “Superman” intercepted that pass

Back in the fall of 1979 the Crisp County Cougars were in their 4th year under then Head Coach Ferrell Henry. The Cougars had just came off a 5-5 campaign in 1978 in the old 1-AAAA with Valdosta, Moultrie and Lowndes County. That year they pulled an upset on the road over Tift County 21-17.

In 1979 the Cougars produced some strong wins over Westover in the opener 46-0. Bainbridge and the thorn in the side of Crisp County  Thomas County Central who own a 14-6 record against the Cougars. However, they fell to Crisp in the fall of 1979 by a score of 22-15 down in Thomasville. Oh do I remember that year so well Crisp starting backfield was big bad Alton Harvey at fullback and the great Eddie Ford at tailback and a guy named Roman “Skeebo” Musslewhite at QB. By all standards the Cougars had a good team, we just happen to play football in the toughest high school region in the United States of America. After all in the nine years since the beginning of the decade 5 of the state championship teams came from 1-AAA which became 1-AAAA. Overall that region owned 17 out of 31 state crowns since records of the GHSA state crowns were kept and 4 national champions. I say all this so as to emphasize the power of the region Crisp County competed in at the time.

Starting the year in AAAA ball in 1979 the Tift County Blue Devils were ranked #7 by the Associated Press. By the first week of October they had climbed to number 1. The National Sports News Service also would go on to rank Tifton #1 in the Nation. The Blue Devils were loaded that year with All State players Ken Hobby, Ricky Holtz and Lineman of the Year Landy Ewing. On November the 1st it started raining and it rained all day and night by the time of kick off in Cougar Den on November the 2nd the filed was disaster. The weather didn’t let up and as everyone knows, rain is a great equalizer. When you can’t throw the ball or run it because it is just to slippery the game comes down to who wants it more. With  the score 0-0 Ken Hobby rolled out to make a pass and found none other than Cougar great Melvin Dean. ”Superman” as I like to call him ramble about twenty yards and scored, the PAT was no good and the Crisp County Cougars would go on to preserve a 6-0 win over the most feared team in the country. The Blue Devils went on to play for the state championship that year losing to Clarke Central and Moeller High school out of Cincinnati went on to win the high school national championship. However, for a moment in time the Cougars were kings of the world in what is certainly one their greatest wins ever. 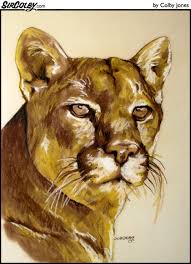