Led by Juniors Dre Porter and Montay Glee the Cougars finished up their holiday season at the Lambert Hook em’ Horns invitational. This is a huge 33 team tournament with many talented teams from across the state competing. As a team, the Cougars finished 12th while still missing 2 weight classes from performing.

Jr. 113lb class Dre Porter (22-2) finished 2nd and 138lb class Montay Glee (21-5) also ended up in 2nd. Overall, they both did a great job, but they will be the first t to admit that they should have won their brackets. They are our leaders for a reason, and doing well at this event should give them plenty of confidence heading into the back half of the season. These tough events also show us what we have to still work and improve on.

I felt Dennis Jackson is really starting to come in to his on now and he finished up at 3-2 in the 132 weight class. Also, I was very happy with how many of our sophomores did as well. LaTrence Hayes 120lb class, Camion Snead 220lb class were both 3-2 and are getting better every week. Overall, the kids really competed hard and represented the program  and Crisp County well.

This week on Friday we will host the Area Duals at the Crisp County High School gym. This is the firsttime we are to be a host sight and it would be great if the community would come out and support the kids. We will be one of 13 schools fighting for 2 spots in the State Duals held at the Macon Centerplex next week. Wrestling should start at 10:00 so make it a point to come watch the Cougars in action 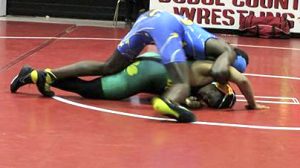