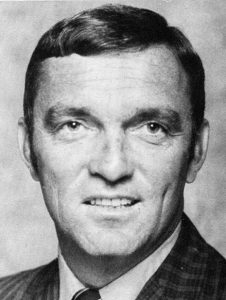 2 Timothy 4:7 – For I am now ready to be offered, and the time of my departure is at hand. I have fought a good fight, I have finished my course, I have kept the faith. Now there is in store for me the crown of righteousness, which the Lord, the righteous Judge, will award to me on that day and not only to me, but also to all who have longed for his appearing.

Charlie Gerald “Bub” Denham, 81, died peacefully at his home in Cordele, GA, on January 17, 2017, surrounded by his loving family. He was welcomed with open arms into the Kingdom of Heaven by family who preceded him in death: his parents, James Olin Sr. and Christine Boles Denham, a brother, Julian G. Denham, and nephew Gregory Lynn Denham.

Charlie earned the nickname “Bub” – which would stay with him for life – at an early age growing up on a small farm in rural Turner County, GA. Born just six years after the start of The Great Depression on September 15, 1935, Bub was the youngest of five children in a family filled with love and faith. It was there in those humble surroundings that Bub learned the values that would later make him a man so loved and adored by family, friends, students, co-workers and even casual acquaintances.  A devout Christian and lifelong member of the Baptist faith, Bub’s love of his God and his life was infectious. He greeted everyone with a smile and a quick wit and the lasting influence he had on all those he touched is immeasurable.  His sense of humor was rare: he never told jokes but always found a way to put a smile on your face with a wry comment or his unique perspective on life.

After high school Bub attended Georgia Teacher’s College in Statesboro, GA, delaying as long as possible his inevitable and mandatory two-year stint in the Army. After earning his B.S. degree in Physical Education in 1957, he was eventually stationed in Germany and even served on the same base with a little known soldier named Elvis Presley.

Revelation 14:13 – And I heard a voice from heaven saying, “Write this: Blessed are the dead who die in the Lord from now on.” “Blessed indeed,” says the Spirit, “that they may rest from their labors, for their deeds follow them!”

After the Army he entered the teaching and coaching profession that for the next 17 years would allow him to impact countless students and athletes. Bub served as a mentor to all he taught and coached. He spent seven years in Worth County, coaching football, track and basketball, then moved with his family to Crisp County in 1966. He would serve as head coach for both the girls and later the boys basketball teams and won over 100 games as a head coach, including three 20-win seasons. The highlight came in 1972-73 when he and future NBA star Wayne “Tree” Rollins guided the Cougars to a 23-4 record and the Class AAA state playoffs.

He left the coaching profession in 1973 and began what would be a very successful 25-year career with Marvair in Cordele, where he had a similar impact on all those he worked with.  Until his retirement in 1998, his influence and inspiration to all of those he worked alongside is something still felt today. Bub was a faithful member of First Baptist Church in Cordele for over 50 years, serving as a deacon and deacon chairman, as well as trustee chairman. He was also very active in the community, serving as a proud member of the Lion’s Club for over 40 years, including club president, and was honored with the Melvin Jones Fellow Award. He was also elected to the Crisp County School Board and would later serve on the Crisp County IDC and as chairman of the Crisp County Power Commission.  His dedication to the place he called home for over 50 years serves as inspiration for future generations.

Matthew 5:4  – “Blessed are those who mourn, for they will be comforted.”

Bub is survived by his beautiful bride and loving, adoring wife of 52 years, Elayne Booth Denham, as well as son Scott, his wife Stephanie and the object of Bub’s constant adoration and attention – his only grandchild – granddaughter Jordyn. No grandfather ever spent more time or effort in spoiling and showering his descendent in love and warmth. His surviving siblings are James Olin Denham, Jr. of Key West, FL, Benny Denham of Inaha, GA, and Sara Ann Moree of Fayetteville, GA.  He is also survived by his special nieces and nephews and their families who all adored “Uncle Bub,” and Rosy Bea – his faithful companion.

He was the ultimate family man. He and Elayne were married in Sylvester, GA, on June 21, 1964, and they were just as in love on the day he died as they were the day they were married. Their relationship was truly unique and special in this day and age and their love was unending and unconditional, rooted in faith, honesty and humility.

Bub always made time for family – whether it was a game of catch, shooting hoops in the backyard or coaching a Little League team, visiting relatives on weekends or just relaxing at home – nothing meant more to Bub than his loved ones. Later in life, when his granddaughter was born, Bub would spend almost as many hours capturing special moments on video for future viewing as he did hunting and fishing. Well, almost.

Genesis 1:28-30 – God blessed them and said to them…  “Rule over the fish in the sea and the birds in the sky and over every living creature that moves on the ground.”

Other than family, Bub’s biggest passion by far was his love of all things outdoors. He was an avid hunter and fisherman and both game and fowl are breathing a little easier now that he has joined his family in heaven. Bub was an excellent marksman who would routinely leave fellow hunters in awe of his “dead eye.”  Whether it was fishing or hunting turkey in the spring, shooting dove in the fall or quail and deer in the winter, Bub was always enjoying God’s gift of nature. His other favorite past time was sports. Bub played basketball in high school and was a notoriously gifted softball player who played into his 40’s. Even after his coaching days were over, he was a long-time supporter of all local athletics and attended as many local games as he could, including most Cougar football games, both at home and on the road. And of course he never missed a Georgia football game, often listening to Larry Munson on the radio while making doves rain from the sky on a fall Saturday afternoon.

Regardless of the endeavor, however, when his work was done or the catch of the day was put away – Bub always treasured most the return home to the comfort and warmth of his loving family.  And now he is in that special place for eternity – awaiting only those of us who will eventually join him to continue the celebration.

John 14:2   – Let not your heart be troubled: ye believe in God, believe also in me.  In my Father’s house are many mansions: if it were not so, I would have told you. I go to prepare a place for you. And if I go and prepare a place for you, I will come again, and receive you unto myself; that where I am, there ye may be also.

The family would like to say a special thanks to everyone associated with Reflections Hospice for the loving care they provide and the dedication to their calling.

Services will be held on Saturday, January 21, 2017, at The First Baptist Church of Cordele at 137 Kelly Road, beginning at 2:00 p.m. Visitation will immediately follow the service. Everyone who was a part of Bub’s life and was touched by his grace is encouraged to come celebrate his life.

The family requests that in lieu of flowers, donations be made to the Crisp Regional Medical Oncology Campaign, 902 North 7th St., Cordele, GA. 31015.