We traveled to Rock Springs in Milner, Georgia to play our first region game on the road. Both teams are very young so it was important for us to get a good start.  We did just that behind a disruptive defense and an efficient offensive attack.  We jumped up 25-6 after the first quarter which allowed us to get playing time for all our girls early and often.  We led 40-9 at the half and played a shortened second half which we continued to build out lead with our young players.  You can see the improvement of our bench every game.  The good part about the schedule lately is that our young players are getting to see the court in varsity competition.   This is allowing our bench to get deeper and deeper.

We came out ready to play and jumped out to an early lead thanks to our press and running the floor to get easy transition baskets.  After first quarter  we led 27-3 and 41-6 at the half.  We played a shortened second half but did get a lot of minutes for our bench.  We didn’t shoot well from the line only making 5-18.  We need to improve in that area before we get into closer games.  Our bench did well but struggled setting up the offense and running it effectively.

We did not press to open a game for only the second time all year.  We opened up with half court man to man did a great job shutting them down.  We ran the court well and had several easy transition baskets that helped us to a 23-3 lead after one.  We once again started playing our bench early and often but was able to continue to pull ahead.  I am proud of the way the girls played it was very disciplined and under control.  We didn’t pick up any bad habits which sometimes happens in games like these.  We had scoring from 12 of our 14 players.  That says a lot about this TEAM.

We once again struggled shooting against this team in the first half.  We missed layups and free throws that we normally knock down with ease.  We did get into foul trouble early as well but still managed to lead 13-9 after one and 28-26 at the half.  Just like last time we came out ready to play the 3rd quarter and pulled ahead 48-33 after three.  We continued to play well in the 4th but went ice cold from the free throw line missing 11 of the 15 attempts in the 4th quarter alone.  We still won the game but we have got to improve from the line especially in late game situations.  I was very happy with our overall effort in the second half it was the difference in the game. 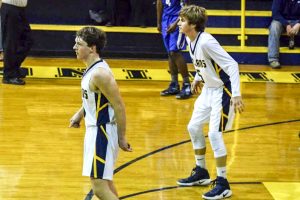 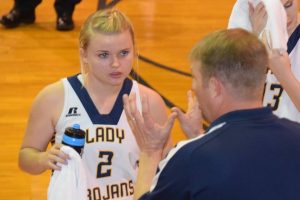