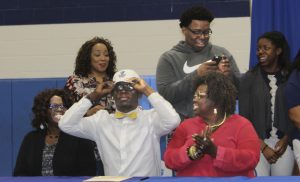 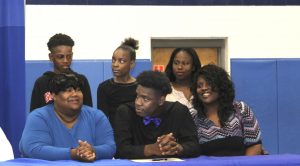 Brandon Dowdell the Crisp County super athlete shocked many by signing with the University of Tennessee at Chattanooga. Dowdell the highly recruited student athlete will be a welcome addition to the MOCS locker room. Jhishawn Taylor the Cougar linebacker penned his intentions with the Georgia State Panthers in Atlanta. Dekevious Hamilton the Cougars middle linebacker inked in at East Arizona State University. The “Big Cat” Markaviest Bryant ended months of speculation by choosing Auburn over LSU,Georgia and Alabama. Bryant who was officially offered over 100 scholarships finally settled on Auburn after “tossing and turning through the night” on whether he would go to LSU or Auburn. All of Crisp County is very proud of these young men and their achievements and look forward to seeing them on the field.

RISE UP!!!! Or fall down hmmmmm