Porter gets a state runner-up in GHSA AAA 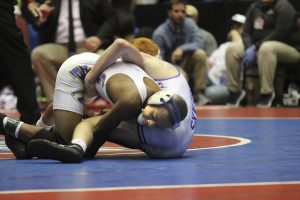 It was a history making day for the Crisp County High School Cougar Mat Cats in Macon. This past weekend in the best in the state came together to settle it on the mat to see who is the best in Georgia. The Cougars sent 3 wrestlers to state and all 3 left as state Medalists.  Leading the way was Jr. 113 lbs Dre Porter. Dre finished as the State Runner Up this season. Last season he was 3rd so he did move up the podium. I know this is not what his goal was. He was leading the entire match until the last 18 seconds when he was beaten by a takedown. This is what makes wrestling the sport it is, it is never over until the last second. He will be back next season to pursue that title. Jr Montay Glee 138 and Soph Mark Lewis 152 both finished 5th in their classes. Montay probably should’ve been in the 3rd-4th match but let one slip away in the Consolation Semi’s, Mark also let a match get away in the same round. They both did a great job in the 5th-6th match and again both are back next season.

As a team we also had the highest placing ever with finishing 11th we missed out on the top 10 by 1 point. To be very honest, we could make a run at a top 4 finish IF things get better and its important to the kids. The talent level is high enough BUT talent is only 1 part of the equation. Honestly in wrestling, it is not even the most important part. For us to make this next step certain things must get better. It can happen here lets all push for that. Great things can become special teams, moments that lead to greatness. Here is to pursuing  greatness.