The Crisp County Cougars and the Savannah Bluejackets did not disappoint the capacity crowd at Crisp County High. In a thrilling triple overtime 108-106 victory the Cougars pulled it out at the very end. As a result the Cougars will move forward next week to face Lovett High school and a very good Bluejackets team will wait till next year. With the score tied at the half. The Bluejackets came out and took a commanding lead in the 3rd stanza. The Cougars would not be denied and roared back to tie the game and send it into overtime.

Lead by Quentavious Dean and his record setting performance of 57 points. The previous record was believed to be held by Ga Tech star Lewis Clinch who had 56. Ijon Owens followed him with a powerful 36 point performance as well. The Cougars took control and in the words of Head Coach Stacey Stephens, “they showed guts just as I have said all along they have tons of guts”. Right when it looked bleak the Cougars worked  “together as a team and I couldn’t be prouder of their effort,” Stephens added. As a team Crisp shot a decent 71% from the line and an impressive 52% overall from the field. The Cougars grabbed a total of 42 rebounds and 13 assists. They were led on the boards by Quay Walker and Valdis Daniels who both yanked down 12 each. Obviously both teams played like champs that is how you get triple overtime games to begin with and the crowd at the Cougar Gym got their money’s worth for sure. The Cougars will play on a neutral court against Lovett High of Atlanta on Thursday February 23rd. Unfortunately there were no stats available from Savannah High. This Cougar team is led by a great group of seniors and all that can go should make the short journey to Atlanta on Thursday. 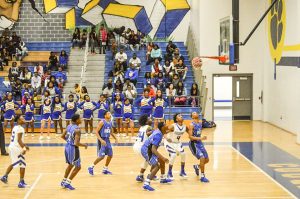 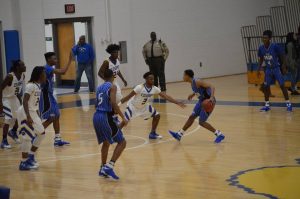