Growing up in the big shadow of his older brother Wayne “Tree” Rollins, Ray-Ray as everyone around these parts knows him, had big shoes to fill.  “Tree“ you see stands 7’2” tall.  His shoe size is humongous, so Ray Rollins had to go to work and make a name for himself.  Ray-Ray did just that, as he already had developed a work ethic as a kid.  As a paper boy in the 7th grade, Ray-Ray began a four-year career of delivering the Cordele Dispatch.   He always strived to improve himself, a characteristic he credits to his brother Wayne as the most single influential person in his life.

Ray Rollings started his career choice back in 1977.   After graduating from Crisp County High, Ray–Ray made his way off to Ben Hill Irwin Tech, where he took up Culinary Arts. Having got his feet wet in a program called FEAST (Food Education and Service training) while still in high school, Ray wanted to be a professional Chef.

After six months, Ray transferred to Atlanta to finish his food service training and go onto become a Chef’s Apprentice.  Ray stayed in Atlanta for 25 years.  He married the former Glenda Byron of Cordele and they have five children Antonio, Mabylon, Raytavius, Ray Jr., and Rachel.

After his 25-year stint in Atlanta working in a number of high-end culinary food establishments, Ray was visiting home when he saw that the old Chicken Box on Joe Wright Drive was empty. Ray moved the family home and worked a number of jobs in the cooking industry around here till he got his business up and running and established.

Now, Ray Ray’s is a household name in the Cordele area, and he often caters numerous big events around these parts. Ray-Ray is a huge Cougars fan and loves to decorate the walls of his restaurant with sports pictures and memorabilia.  He also spent twenty years coaching youth basketball.  Ray recently celebrated his 36th wedding anniversary.

As the years have progressed on Ray from those humble beginnings here in Cordele over 40 years ago, one might say that Ray Rollins has come full circle.  No longer under the shadow of his big brother, Ray has become an intricate part of his community and is beloved by many.  He is now his own man, a family man, a businessman, and a Godly man.

Ray has a hobby that he absolutely loves and that is raising chickens.  Currently, he has 75 chickens, but at one time, he was raising 300.  Ray loves to use his own eggs when preparing some mighty fine delectable dishes, and he also sells chickens.

Ray is very honored to be featured for Black History Month and stated that he has seen a big difference since former days and “as a whole, through it all, I believe this community is really coming together, based on where we are at.” 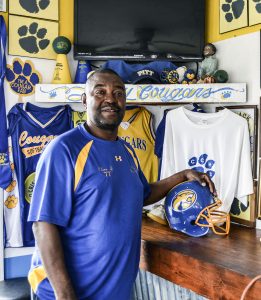