Fullington Girls get State Runner Up

You could not pick an opposite team for us to play than Heritage.  We don’t have any Seniors and their starting 5 are all Seniors.  We like to press and play man to man or zone matchup defense and they play a 3-2 zone.  We like to push the tempo and run the court and they run a deliberate half court patient attack.  As a fan you would have to really look forward to a game like this in the championship.

We did not get the start we wanted and that credit goes to Heritage they did a great job breaking our press and they worked the ball and waited for a good shot and scored easily early in the game.  We did a great job as well on offense getting good looks and easy shot under the basket but just like in the semifinals we could not make a shot.  We fell behind I think 9-0 at one point.  We trailed 10-4 after the 1st and 19-7 at the half.  That was the lowest half scoring for us all year.  Albany State has a nice gym but it just didn’t treat us well at all.  We started playing a little better defense the second half and did a great job again on offense only to have the same results missing shots we normally knock down.  We trailed after the 3rd  by a score of 26-13.  When the 4th quarter started we started looking like our old selves and really got after it on the press and finally were able to convert it into some offense.  We closed to score to within 4 or 6 points and had the ball on several occasions with the score that close but the ball just would not go in on the shots at that point again.  We had to start fouling at the end and they did a good job hitting the shots that counted to keep a slight lead.  I am proud of the girls for never giving  up.  We did a great job on the boards again out rebounding them 39-30 with Sarah Kate Wall leading us with 10 boards.  We also led in the turnovers causing 20 turnovers most of them in the 4th quarter and we had 16 steals.  The difference in the game was the shooting percentage.  They hit 50% of their shots from the field and we made a season low 13% from the field.  We just had a hard time shooting in that gym.  We played two games there and it resulted in our two poorest shooting performances of the year.

I am very proud of the girls team this year.  They finished 27-3, Christmas Tourney Champions, Region Champions, and State Runner-up.  The best part about all of this is that all the girls will be back next year.  We have some work to do but we will be back and we hope to finish this off next year with return and ultimately a victory in the Final Game. 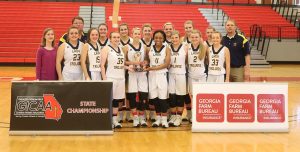