Wildcats season Comes to an End in the Elite 8

The Crisp Academy Wildcats boys team season came to an end Saturday night at the hands of the defending AA state champions FPCA of Hinesville. “We played well in spurts and kept the game very close except for the 3rd period and that was the difference in the game,” said Head Coach George Kennedy. The Wildcats dropped a 77-59 decision to FPCA. The Big Cats season ended with 17-11 report card on the year. The leading scorers for the Cats was Bobby Ray Mitchell with 28 points, Nathan Willis with 12 and Ravi Patel added 11 for the Wildcats. On the flip side Kahlyn Weakly of FPCA had 29 points and Isaiah Scott added 21 points for the victors. ”It has been a good year and I am very proud of the boys and their effort and hard work,” added Kennedy. 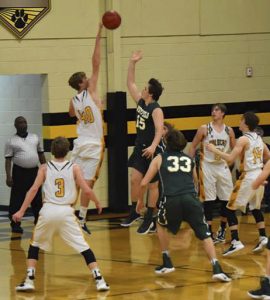