On Monday evening something happened in Pinehurst that doesn’t happen around here much. The Wilcox Patriots played Fullington in a baseball game. For the 1st two innings Fullington clung to a 2-0 lead. Then in the 3rd inning things broke open. The Patriots pushed 6 runs across the plate in the top of 3rd. Zach Gibbs singles  and then Jaydon Coleman hits a line drive single that brings Gibbs to third. After a ground out Bo Mullis draws a walk to load the bases. Josh Harrell singles bringing in two runs. After some walks by Fullington starting pitcher Massey Evans and some timely hits. The Patriots stood on top 6 to 2. Suddenly the bottom of third began the Trojans came unleashed. Giving up 3 walks and 3 errors and several timely hits two by Colin Infante a single and a double. The Trojans pushed 9 runs across the plate in the bottom of the 3rd to take an 11-6 lead. After Wilcox failed to score in the 4th inning the Trojans came right back and sent 6 more runners home. The Patriots were unable to score in the top of the 5th and the game ended there by the mercy rule at 17-6. For the Patriots they were led on offense by Gibbs with 2 hits and  2 Rbi’s along with Harrel who had a hit and 2 Rbi’s as well. Over all Wilcox got 6 runs on 5 hits and 9 walks. The Fullington Trojan’s collected 8 hits, 8 walks with an astounding 12 Rbi’s produced to score 17 runs. The winning pitcher Griffin West struck out 2 and walked 1 in two and a third innings. Fullington was led on offense by Infante with 2 hits and 3 Rbi’s and 3 runs scored. Breyer Tyndal, and Griffin West also collected 2 hits in the victory. 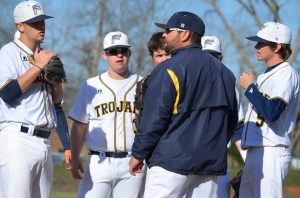 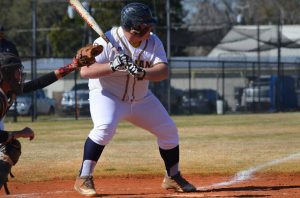