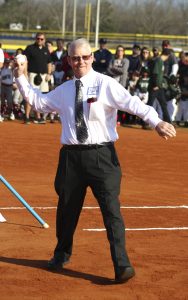 More than 400 kids took part in the opening ceremonies of the Crisp County Youth Ball League. On

a nice breezy day long time coach, umpire and league official Herbert Hughes threw out the first pitch. Mike Hutchens gave the invocation and led the Pledge of Allegiance to the flag. The national anthem was beautifully sang by Madilyn Thompson. After the parade of teams the traditional “play ball” was announced by Crisp Rec. Director Eric Bozeman. Saturday’s games and results in 8u baseball saw the Badgers beat the Wildcats 7-0, Bulldogs 12 and Rams 5, Crimson Tide 11 and Fighting Irish 0. In the 10under baseball the War Eagles and Tigers played to a tie 3-3 and the Bulldogs beat the Crimson Tide 5-4. In the 12 under boys league the Tigers won 10-0 over the Wildcats and the Jayhawks beat the Rams 11-8. Girl’s softball 8 under division saw the Bulldogs winning 2-1 over the shockers and the Crimson Tide handles the Hurricanes 4-3. The 10 u girls saw the Wildcats beat Bulldogs 4-1 and the 14 under girls was Seminoles 14-0 over Hurricanes.