On Monday the Crisp Academy Wildcats Golf team took on 4 other teams. Tift Area, Terrell Academy, Windsor and Westwood all fell to the Wildcats and it wasn’t even close. As a team the closet one to Crisp Academy was Tift Area and they were 40 strokes off. “We are playing well right now,” said Head Coach Shane Folds, “the team  is making putts and putting themselves in good position to win.” On the day the Wildcat low medalist Cooper Folds shot a 75 followed by Jackson Penton 82, Ravi Patel 82,Halle Newman 86 and three other non contributing scores Aubrey Brown 99, Kaleb Spires 104 and Annie Laurie Hayes 119. The Wildcats stand at 3-1 on the year and will be hosting region on April 13 and state April 24th at Veterans State Park. 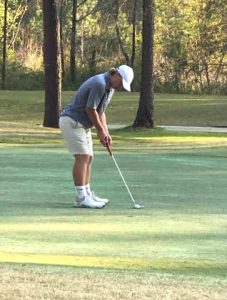