The Crisp Academy Wildcats hosted Covenant Christian on Thursday and from the start they dominated the game. However, late in the game in the top of the 6th they nearly let the game get away from them. Headed into the 6th stanza the Cats led by a 9-1 margin but gave up 7 runs to allow Covenant to pull within one run. The Cats came back in the bottom of the 6th and added 2 insurance runs to make the total 11-8. Starting pitcher William Purvis went 5 innings and gave up one hit and one run, striking out 9 and walking two. In the sixth William Bodrey came on in relief and though he pitched ok, the game came unraveled.

The Cats committed an unusually large amount of errors and Bodrey  walked  a couple and gave up couple hits and the runs poured in fast for Covenant. The Cats regained their composure and put the game away in the bottom half of the sixth. For the Wildcats Purvis was 4 for 4 with a homer and a double. Garrett Holt had a double and a triple and Donavan Dorough had 2 hit day as well. Bodrey came back out in the top of the seventh and threw 6 pitches to retire the game. “We had not been on a ball field in two weeks till game time, due to weather and Spring break and it certainly helped make the mess in the top of the sixth,” said Head Coach Chuck Hester. Next up for the Wildcats is a visit from Southland on Monday at 4:30pm at Wildcat Den. 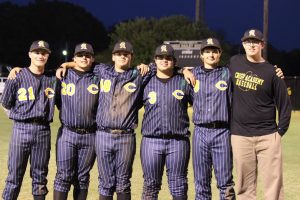 In Thursdays game against Covenant Academy, the Crisp Academy Wildcats wore uniforms in observance of National Donate Life month.  The uniform has the green ribbon on the left chest for Organ Donation Awareness. The month of April features an entire month of local, regional, and national activities to help encourage Americans to register as organ, eye and tissue donors and to celebrate those that have saved lives through the gift of donation.  The team also takes this time to remember former CA student and athlete, James Bodrey, who gave the gift of life.