The Crisp County Cougars pitched a 1 hit shutout against the Monroe High Tornado’s on Friday evening and won the game in 4 innings by virtue of the mercy rule 15-0. The Cougars wasted no time in jumping down the proverbial throat of the visitors 8-0 in the bottom half of the 1st inning. The Cougars would go onto add 2 more runs in the second and three more in the third. Finally in the bottom of the 4th the Cougars put the game away with two more runs. Russ Taunton led the Cougar offense with a 3 hit performance and he was followed by Ty Johnson and Brennan Bledsoe who both collected two safeties on the night. From the rubber Myles Napier pitched 3.0 innings walked 2, gave up 1 cheap hit and struck out 5. He was relieved by Bailey Barfield who walked one gave up no hits and no runs. The win over Monroe pushes the Cougars to 3-3 in region 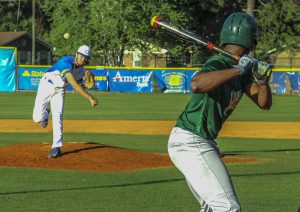 Myles Napier delivers a smoking fastball past  a Monroe hitter