For all the talk I hear from young people comparing King LeBron James to Michael Jordan I will say he is one the best ever. Is he “the best” ever NO! With my sons and everyone else under 35  telling me how wrong I am, all I can say is facts don’t lie. LeBron started 4 years earlier than did Michael. Remember LeBron came straight out of high school and into the NBA, Kudo’s to him that is hard to do. He has also lost 5 NBA title games. Jordan never came close to losing five titles. Jordan took time off to go try his hand at playing pro baseball, ( he didn’t make it). I never remember Jordan ever being a cry baby; he was always the classiest guy on the court and in public. King James just doesn’t compare to Air Jordan sorry. Now granted James still

has some years left to play and his book hasn’t been written yet. The argument that they ain’t as good an athletes as they are today is flat wrong. Dr. J could jump just as high and long as any today, so could Jordan, Dominque Wilkins and a dozen more. Oh and if anyone says that any of them can out shoot Larry Bird they are slap crazy. If any today thinks that any players can run an offense better than Magic Johnson they are fooling themselves. Yeah the NBA today has some great players. Durant, Curry,Leonard, James and many more but the 70’s 80’s and 90’s had their fare share of great basketball players and they didn’t whine  every time they got a little foul. Next move for Lebron is to go out and get another great player; teams don’t know how to build their own team from scratch anymore. Look for Cleveland to spend lots of money with some real good players going into free agency in July. I just don’t see how NBA owners make money paying those kinds of salaries. 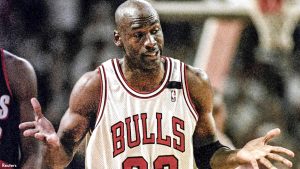 Jordan- “I am sorry Lebron but the people have spoken. 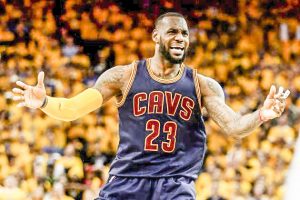 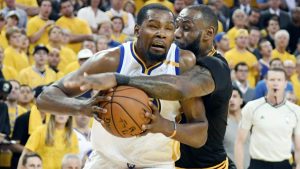 James -”but but but I am the King”