Where are they Now: Tony Dickerson

A profile in courage

Occasionally as we go through life we all bump in to an extraordinary story well about 37 years ago myself and about 75 of my team mates and coaches did just that. Born William Anthony Dickerson. Tony as we all called him or “Moby” was the nickname we hung on him way back then, mainly because he was 6’4’ and over 300lbs. Tony was a grade behind me so I always  played baseball and football with him as we grew up. Tony was the oldest son of Dwaine and Margaret Dickerson and he had a little brother named Tommy.

Like most kids in South Georgia back in the day Tony liked playing football and baseball. However, when he was nine years old little did he know that a trip to Lake Blackshear would be the beginning of years of injuries and suffering. Due to a boating accident when he was nine Tony had his left foot nearly completely cut in half the long way, it was barely dangling on. After a couple of surgeries the foot was back in place and Tony was learning to walk on it again, but he missed the second half of baseball season. If this bad foot ordeal wasn’t enough add to the fact that “Big Moby” was born club footed and with dislocated kneecaps. He would constantly pop his kneecap out of place just walking and he would also be fitted with special shoes for his clubfeet through most of his early years. The shoes did their job and Tony was able to walk straight but those kneecaps were painful.

Around his 11th year in this old world Tony would get his first set of surgery’s on his knees to fix the problem. For the most part on his left knee the surgery was a success at Scottish Rite Hospital. Tony would have to endure a total of three surgeries on his right knee to fix the muscle and ligament problems but finally they got it repaired and Tony after much physical therapy was walking again. As I mentioned earlier Tony and all of his friends called him Moby, which was short for Moby Dick, because he was a really big dude. Had to go up and play football on the 8th grade team as a 7th grader because of the newly imposed weight limits in Midget Football. It was do that or not play so Coach Clack let him move up.

Oh  ! I almost forgot Tony broke both collarbones in separate accidents and both arms all before he reached high school. Personally it is a miracle he can even walk or is alive for that matter. Then after the magical season of 1980 when we went undefeated, Moby was a sophomore and would be a junior in the fall. One day early in 1981 around mid to late February. Tony and some other buddies all much smaller than he was were doing what teenage boys will do, that is what your not suppose to be doing. Tony was climbing in the rafters above the High School Auditorium, that is the Middle School now. The boys were walking and crawling across narrow boards when Tony missed his step and fell approximately 24 or so feet into the chairs below. At over 300lbs this was a very big thud and Tony’s leg was sticking through the chair and he was lying on his back in the aisle. Tony’s leg was broken in half both bones the tibia and fibula were sticking out the bottom and through his skin. Tony was looking for his foot but it was dangling off the other side of the chair and he couldn’t’ see it. Girls were screaming like the kind of yells you here at a horror movie. One female teacher was running around almost in shock but did finally get the ambulance called.

Coach Henry was the first adult on the scene. “It was a terrible sight and as I approached Tony he said, Coach you reckon I will make it back in time for spring practice,”

Wow! Just wow! This was a catastrophic injury but then Tony was use to them in his 16 years he had already broken and or cut in half 5 bones or more because many were cut during the boat accident. He had 5 surgeries and wore corrective shoes and had dislocated both kneecaps more times than can be counted. Now Tony faced a truly daunting challenge. The skilled orthopedic Dr. Glenn Williams from Cordele who practiced in Albany ran a very long rod through the foot into the leg bones and put in a number of screws. Dr. Williams for the most part rebuilt Tony’s leg. On a personal note Dr. Williams also put me back together some 2 years later when I fell 40 feet and broke my back in 5 places. In 1981 orthopedics was by no means as advanced as it is today, but it just so happens that one doctor was on the cutting edge of technical knowledge and he was Dr. Williams.

Tony stayed in a cast for a very long time and yes he missed spring practice. He did however make it back for summer workouts and though moving very slowly he did all that was asked of him. By fall and the start of the football season Tony was still rehabbing some and he missed starting at center for the first 4 games of the season. At the midway point of his junior year “big Moby” was starting at center on the highest ranked Cougar football team ever. What a ride it had been.

Tony went onto play a year of college football at Georgia Southwestern before joining the US Air Force as a Security Police. After serving a hitch Tony returned home as a police officer before going to work with the state. Tony spent over 18 years with the state of Georgia, most of as a revenue agent. In 2005 Tony returned to college and finished graduating magna cum laude. He worked the last 11 years as a Registered Nurse before retiring in 2016. Tony still gets around fairly well considering he really doesn’t have any cartilage in his knees. He is married to the former Jackie Jones of Cordele; they have 5 children Stephen (deceased), David, Toni, Addie and Ansley. As of now they have no grand children.

Now days Tony enjoys sports and bible study. He names to memorable sports moments; one was the night we lost to Waycross for the South Georgia title and a game in college up in Kentucky that was televised. Through the years Tony also coached midget football and served as GHSA official in football, softball and baseball for nearly 20 years. It has been said that public service is one of the most admirable traits. Tony has served and volunteered no doubt about it. There is however, one word that stands out in my mind when it comes to Tony. So in the book of the Cougars in Chapter “83” let it be said, that when you look up the word DETERMINATION, there you will find Tony’s face smiling back. Of course willpower, strength of character are two more I can easily add. So let it be written, so let it be done. 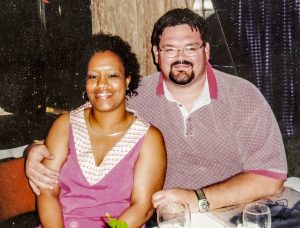 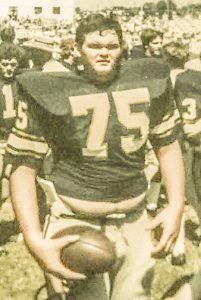 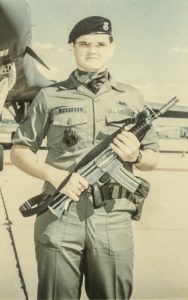 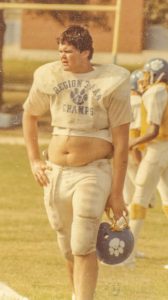 GHSA may survive yet