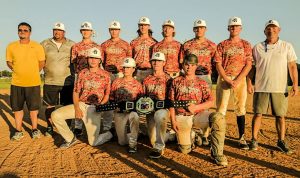 The Longshots 14 under baseball team made up of players from Crisp and Wilcox counties mostly. Won the Cam Sports Summer Nationals Baseball Tournament in Dublin, Ga. this past weekend. The three day clash began on Friday and finished late Sunday afternoon. The Longshots or as I use to call them when they were small boys “ the sandbaggers” went 3-1 in pool play and started out as the #2 seed going into the brackets. It was at this point the boys turned up the heat and started eliminating teams from play. They are now proud owners of the Championship Belt.