It was a Friday morning in early November of 2016. Jeff Davis and his son Dylan had gone hunting in North Crisp County. Something they had done many times before, only this time history would be made. Jeff asked Dylan which stand he wanted to hunt and Dylan chose the one close to the camera, that days before had revealed what looked like a pretty nice buck. Jeff escorted Dylan over to the stand and then did a semi circle route to his stand, got in it and got comfortable. A little while later a doe came out  some 70 yards away or so but still undercover. Behind Ms.” Darla” Doe was big bad “Bubba the Buck”. It was in the heart of the “rut” for you non deer hunters that means does are in heat.

“Bubba” was behind some thick so Jeff couldn’t get a clear shot but he could hear him “blowing”. Just a short time later Ms. Darla stepped out less than fifty yards away. Jeff remained calm waiting on “Bubba” but Darla seemed nervous and he thought she was going to run off, however she calmed down and went back to grazing. Then suddenly just as the 9 point buck the week before had done that Jeff killed ( about a 135’ count), Bubba bounced out and clear view maybe 45 yards away. Jeff the old hunter didn’t hesitate, because waiting can be real bad. He raised his weapon a .270 took aim and “BOOMMMMMMM” a heart shot dropped the behemoth “big Bubba the Buck” dead in his tracks. Jeff waited a moment to make sure he didn’t get up and run. Then he got down to examine his trophy. Dylan radioed “did you get something” and Jeff said “yeah come on down”. When Jeff got to the deer he realized very quickly this was no ordinary large buck, it was  gargantuan, huge or massive if you will. Not only did it weigh close to 300lbs but the 8 points on top of his skull had a total length of over 170’ which after deductions was a typical State record for an 8-point at 166 5/8 Boone and Crocket Buck. “ I give all the glory to God only he can put something like that in your path,” said Davis.

For winning the weekly big buck contest Jeff gets the opportunity to shoot for the new truck in the GON magazine contest. Jeff’s story is also featured in Georgia Outdoor News magazine. 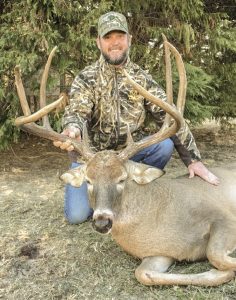