Cougars and Bobcats tangle for the 24th time in history

Cougars and Bobcats battle Crisp comes out on top 40-18

Get the picture now! It’s Friday night in the “grove” Vienna , Ga. The Dooly County Bobcats are hosting their bigger neighbor to the south Crisp County and the war got started in the 1st quarter. After Jammie Robinson returned the opening kick off 46 yards to midfield, the Cougars punted and then held Dooly as well. The Cougars then got the ball back again and drove down the field  and scored the first touchdown of the night a 3 and half yard tote by Dakevion Thomas. The PAT by Adam Posey was good and the score was Crisp 7 and Bobcats 0. In the first half of play the home team could nothing going offensively. An interception by the Cougars Adarious Armstrong of a Bo Lawson pass resulted in the Cougars again marching down and scoring on a one yard carry by QB Neno Patrick. The PAT was no good and the Cougars had a 13  to 0 lead.  Crisp got the ball again and drove down when “sweet legs” Robinson scampered 7 yards for another Cougar score in the 2nd quarter of play. The Pat was good and Crisp was standing tall at 20 to 0. Before halftime Felton hooked up with Robinson on a 15 yard  TD pass, the PAT was good and the Cougars went into halftime with a 27 to 0 lead.

On a night when the humidity could be felt down to your bones and cramps began to ease in to the equation especially for Dooly. The Cougars go the ball back after the opening 2nd half kick off and Felton rambled for 15 yards to score and the PAT was dropped and no good and the score was 33-0. The Bobcats under the direction of Cougar alumni Jimmy Hughes now in his 8th year at the Bobcat helm got the boys energies redirected and they began to climb out of the hole they had dug. First off was a 3 yard pass from Quarterback Bo Lawson to Jarquavius Brown, the PAT was missed and the Cougars lead 33 to 6. Dooly held Crisp and again hit pay dirt on a 47-yard strike from Lawson to Desi Lester who streaked down the sideline for the score. The PAT was again no good and the score was 33-12. As time got late in the game Bo Lawson again found the end zone and with a 3rd missed PAT the score was 33-18. However all scoring came to end with a 81 yard kick of return by “sweet legs” and the good PAT clinched the game for Crisp 40-18.” They got a good team but I was proud of the boys battling as they do against a bigger team and continuing to give it their all,” said Coach Jimmy Hughes.

Head Coach Brad Harber in his first official game as a Head Coach said, “ I felt like we were much improved and got better.’ “ If we can continue to do that each week we are going to be ok in the end.” “  We got a few things to clean up but then the guys are still learning and if you can get a win against a well coached and strong team like Dooly, then it’s been a good night,” Barber added. On a night of what looked like a sellout crowd this one went to the Cougars. Next week Crisp travels to Americus on Friday night and Dooly travels north to face the defending single A champs in Macon County. 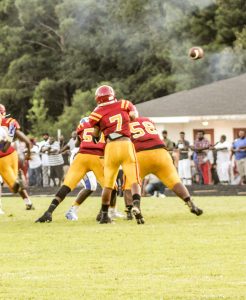 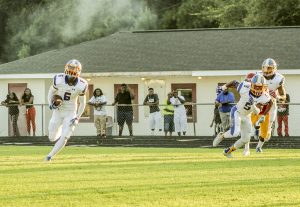