On Friday night the Crisp Academy Wildcats fried up a little “Eagle” as in the  Ballard Academy Eagles and then ate them and the eating was good! The final score was a 64 to 34 win over in Auburn, Ala. One might think that if you score 7 offensive touchdowns your yardage would be slightly higher but the Wildcats also had a kick off return for a touchdown and a pick 6 on defense. Gaige Little led the ground game with 81 yards on just 6 carries and a touchdown and Griffin Gravitt followed in 2nd with 35 yards on 6 carries and 2 touchdowns and a 2 point conversion. In passing Gravitt hit on 14 of 24 for 194 yards and 4 touchdowns and 2 more 2-point conversions. In the receiving corps Little led the way there as well with 95 yards on 5 catches with 2 td’s and a 2 point conversion. Baylor Pless had 5 catches for 44 yards and a touchdown and Blake Odom had 2 catches for 42 yards and a TD. Pless returned 3 kick offs for 146 yards and another score. “ It was a very good offensive effort,” said Head Coach Price Jones.

On defense the Cats had a number of leaders. Dillon Easterlin had 3 tackles and 10 assists, Billy Hardin went 2 and 8 with a tackle for a loss. Justin Pate was 1 and 4 but had a tackle for loss and 2 sacks. Austin Cobb had 6 tackles with a loss on one as well. Totals for offense for the Cats was 202 yards total passing and 125 on the ground. 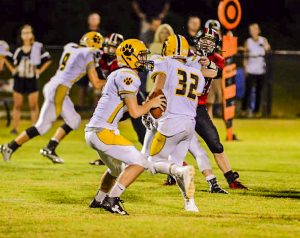 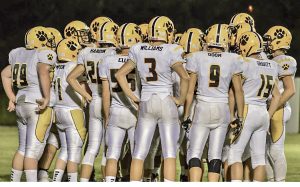 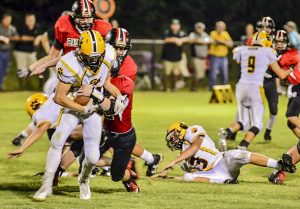