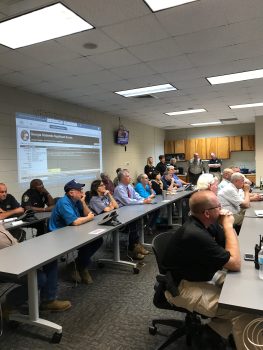 CORDELE — Crisp County declared itself under a state of emergency late Thursday morning. The Declared SOE, issued at 11:32 by The Crisp County Board of Commissioner Chairman Sam Farrow, was said to be used a preventative measure for price gouging.

The evacuation of Floridians is projected to bring people to Crisp County as a place of refuge. Many of Cordele’s hotels lie along Interstate 75, which is a direct shot for most Floridians getting away from Hurricane Irma.

Many of the hotels have already filled up as of Wednesday. The Best Western Colonial Inn reported all 93 rooms had been filled up by Wednesday and would continue to be filled up until next week.

Ramada Cordele employee Kathy Wood said all 103 rooms had been booked since Tuesday and there wouldn’t be many openings until Thursday of next week.

Cindy Harrington of the Holiday Inn Express & Suites said there were very few rooms and people were staying here when they were available before moving further north.

Evans said the church would open at 1 p.m. Friday afternoon and will be a first come, first serve basis. He anticipates that by Friday night they will be filled to capacity.

Currently, 75 nursing home patients are being transported from Savannah to Crisp Regional Hospital as Chatham County has been placed under a mandatory evacuation.

In the Sheriff’s briefing at 2:30 p.m. with the National Weather Service’s Tallahassee office, reports said Sunday morning would be the earliest reasonable arrival for Tropical Storm force winds; however, most likely the arrival time would be Sunday evening.

The report said the area would most likely experience Tropical Storm Gusts, however that chance increases if the storm would continue west.

Rainfall is projected to not be a big concern, as around 3-5 inches will be the maximum for the region.

The Sheriff’s Office will have another meeting tomorrow at noon with a state representative to give updates on the storm.