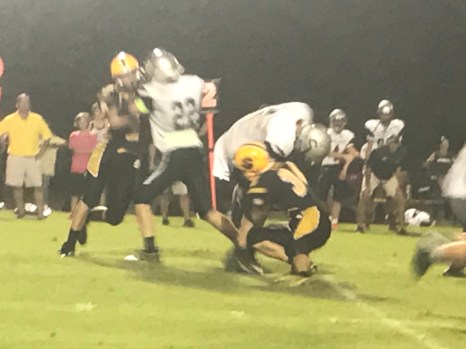 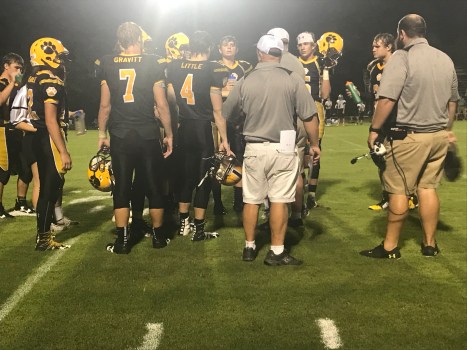 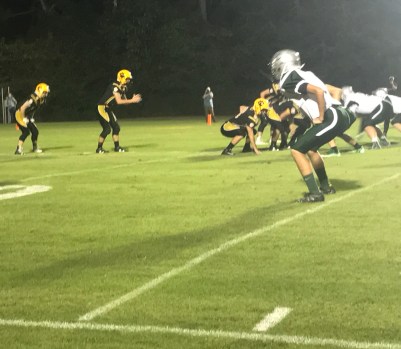 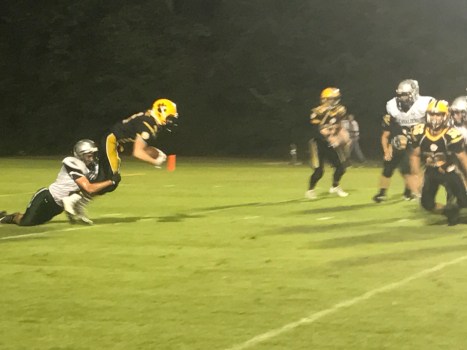 The Crisp Academy Wildcats hosted the Crosspointe Christian Cavaliers on Friday night in what ended up being a high scoring shootout. The Cats kicked off to open the game but wasted no time in giving the ball to their offense after forcing the Cavaliers to fumble possession away. The Cats made the turnover payoff shortly after when they opened up the scoring on a touchdown pass from Griffin Gravitt to Gaige Little. The two point attempt was unsuccessful but the Wildcats had the lead early in the first quarter.

Crosspointe wasted little time in equalizing the score as they picked up their first points of the night just over two minutes later. The Cats defense came up with a stop on the two point conversion attempt, which kept the score at 6 apiece about halfway through the first quarter.

After the subsequent kickoff, it took the Cats just six plays to pick up their second touchdown of the game. The touchdown came on another long pass play from Griffin Gravitt to Gaige Little, and Gravitt tacked on the two point conversion attempt to give CA a 14-6 lead with 3:55 remaining in the first quarter.

The Cavaliers picked up their second touchdown of the night just two plays later to bring the score back to 14-12 in favor of Crisp Academy. After a 30 minute delay because of lightening in the area, Crosspointe scored two quick touchdowns, which gave them a 28-14 lead early in the second quarter.

The two teams traded defensive stops before CA put up the final points of the first half on a 50 yard touchdown pass from Gravitt to Baylor Pless. The Cats tacked on the two point attempt and went into halftime trailing by a score of 28-22.

The Wildcats opened the second half with the ball but they were forced to punt after getting pinned deep because of a penalty. Their defense stepped up to force a turnover on downs, and the Wildcats tied the score using a long 9 play drive highlighted by a crucial fourth down conversion that set them up on the Cavalier 1 yard line. Griffin Gravitt punched in the touchdown but the two point try was no good. The touchdown tied the score at 28 halfway through the third quarter.

Crosspointe responded with another touchdown run just two minutes later and they took a 34-28 lead into the fourth quarter. The Cavaliers added to their lead early in the fourth quarter after forcing a CA punt. The Wildcat defense prevented the two point conversion, but the touchdown put them behind by a score of 40-28.

The Cats knew they needed a quick score if they wanted any chance of making a comeback, and they got it when quarterback Griffin Gravitt found Baylor Pless over the middle for their second touchdown connection of the night. The two point conversion attempt was successful as Gravitt found Gaige Little on a short pass to bring the Cats within 4 points at 40-36 with 8:49 remaining.

Crosspointe scored again under 3 minutes later to extend their lead back to 12 points at 48-36. The final points of the game came when Gravitt once again found Pless on a touchdown pass from about 40 yards out. The two point conversion brought the score back to 48-44 in favor of Crosspointe with 2 minutes remaining in the game, and the Cavaliers were able to run the clock out from there.

The Cats hope to get back in the win column next Friday night as they travel to LaGrange to face off against Lafayette Christian.