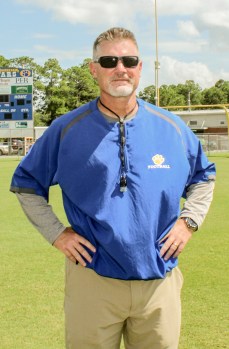 Cordele — For Crisp County Head Football Coach Brad Harber, homecoming week is upon them. Sitting down with him there was plenty to discuss.

The Cougars have been off the past two weeks, having last played on September 1 against Turner County.

“You always worry about that homecoming week no matter who the opponent is,” Harber said. “There’s a lot of distractions going on at the school. But I’m really excited to get back to playing on Friday nights.”

At this moment, Crisp County only has nine official games on their schedule following last weeks cancellation by Rutland High School.

“We’re actively looking for schools at this time to bring our schedule back to 10 games,” Harber said. “We have an open week on October 6, so we’d like it then and at home.”

For Friday, however, they’ll take on Spencer a AA school from Columbus. The two schools faced off last season at Spencer with Crisp County narrowly coming away with a 21-12 victory.

Spencer is currently 3-1, having most recently defeated Dougherty 28-13.

“We need to get off to a fast start on offense. We need to churn out some first downs and ultimately those will lead to scores,” Harber said. “It’s going to be very critical for us on Special Teams not to make any mistakes. They have enough athletes to hurt you in the kicking game.

Harber recalls the team committing a lot of penalties in the two teams last meeting, something that has to be avoided.

Coach gives the incoming Green Wave high praise saying they are a well coached team, which translates on the field.

Both junior Patrick Felton and senior Miles Napier have split time at the quarterback position with Felton being primarily the starter.

“Both of these guys have the capability to run everything within our system. We’ll continue to do that and go with whoever has the hot hand that night.

For the key to the game — Harber simply says both sides of the Cougar line of scrimmage need to come ready to play.

“If the offensive and defensive line do what they’re supposed to and have a tremendous game, there’s no way we’re going to lose this football game.