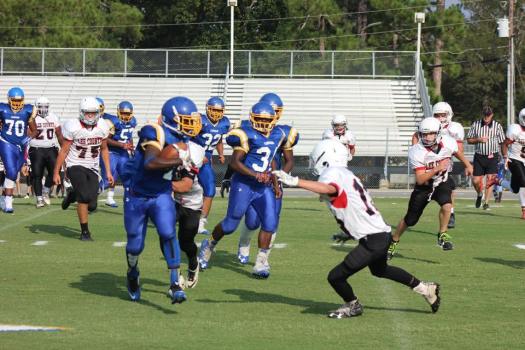 CORDELE — Two undefeated teams walked into Cougar Den last Wednesday with only one team coming out with the right to home field advantage for the middle school playoffs.

The Cougars took the opening possession and began a slow, but methodical drive down the field on the legs of running back Raheem Ashley. Patience paid off as the Cougars hit pay dirt and took an 8-0 lead.

Both teams struggled offensively and unable to capitalized off turnovers.

It took a big play from quarterback Jack Carter to Quise Palmer to ignite the Cougar offense. Carter unleashed a deep bomb, finding the hands of Palmer and 80 yards later Crisp County extended the lead to 14-0.

Palmer, Trae Walker and Rod Mason all recorded interceptions as the Cougars only allowed a six spot in the second half en route to another win.