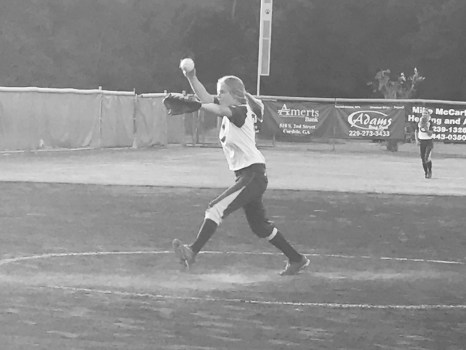 The Lady Hornets maintained their 4-0 lead until Crisp got on the scoreboard with a run in the bottom of the fourth inning. Megan Bloodworth got the comeback attempt started by reaching base on an infield hit, and Jordan Dickerson followed with a base hit to right center. Ivy Lewis provided the RBI hit that scored Bloodworth shortly after to cut the Cook lead down to 4-1 going into the fifth inning.

Mia Murray needed only five pitches to end the top of the fifth, and the Lady Cougars continued their comeback attempt in the bottom half.

Murray led off the bottom of the fifth with a single to left, then Hunter Meadows reached base on a bunt single with two outs. Kirin Webb came up to bat next with two runners on base and she delivered a clutch two-run double to bring the score to 4-3 in favor of Cook County.

The Lady Cougars managed to get the bases loaded in the inning, but they were unable to score any more runs, and their hard-fought comeback attempt fell just short as Cook held on for a 5-3 win.

The Lady Cougars will finish up the regular season next week with an away game on Tuesday at Dougherty County, and then senior night on Thursday vs Worth County.