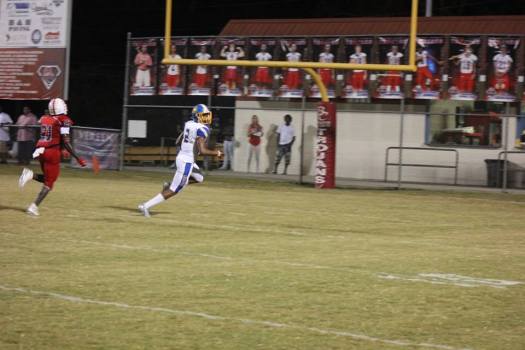 QUITMAN — Does anyone remember the little mouse from the Bugs Bunny /Road Runner hour? The name was Speedy Gonzales, the fastest mouse in all of Mexico.

Have that picture in your mind? Now you get the idea of how fast Brooks County was on the football field. Having the opportunity to watch them run was like watching six or seven Jammie Robinsons run up and down the field.

So when you make a checklist of things needed to get a win against Crisp County put lots of team speed at top. Then add discipline, attitude and good coaching and the cake is baked.

The Cougars had two plays that aided Brooks a whole lot. Crisp County got picked off for touchdowns twice and those 14 points was enough of an edge to take the win.

When you look at the factors at hand — a long trip down to Quitman against a very solid football team and add distractions that have plagued Crisp for the last week it seems that a loss was a very real possibility. They say that you can learn a lot from a loss and it can be beneficial, something I can agree on.

First of all, those seniors know they can be beat so they need to step up their “A “game with leadership. Second, let’s not forget that if not for a gifted field goal kicker, last year Brooks could have very easily won up here in the “Den.” Injuries have plagued the Cougars this season. We lost two very valuable lineman, one on defense in DeAngelo “Puppy” Griffin, who is out for the year. The junior is nothing short of a beast on the D-Line and is hard to be replaced.

Then the leader of the offensive line Antonio “Pee-Wee” Addie is done at least until play offs with a broken foot. I have watched him since he was 8 years old at the Rec. Department and he has developed into a D-1 prospect. Yes, we have been damaged. Great teams rise above adversity and I am certain our boys will step up to the challenge. The “gauntlet” has been thrown down at their feet. Will they pick it up and get into fighting position? The answer is yes; the Cougars will bounce back from this loss to be a very good team and are primed to make another deep playoff run.

On Friday night, Brooks County seemed to own the field position and as far as the ground game went they were superb.

Brooks rushed for 235 yards and added an additional 42 yards passing, compared to Crisp 267 yards passing and negative 9 yards rushing. A very fast front 7 forced sacks, keeping the Cougars from gaining any momentum on the ground. However, both Tubby Spivey and TJ Ming found the end zone for the Cougars and the final score ended up 31-21.

It seems the Hurricane just gave the Cougars too much time on their hands. They will now prepare for Monroe and the opening of region play. “ In a big game such as this one, each team can’t afford mistakes. We made way to many mistakes against a good team and those two pick sixes didn’t help us,” said Head Coach Brad Harber. “We are going to get back to work and clean up these errors and get ready for region play, I am proud of how hard the boys played tonight, they don’t have any quit in them,” Harber added.

The Cougars will be at Monroe of Albany next week on October 13th and then we travel down to Adel to take on Cook County. After that we come back home to “The Den” against Dougherty and Worth.