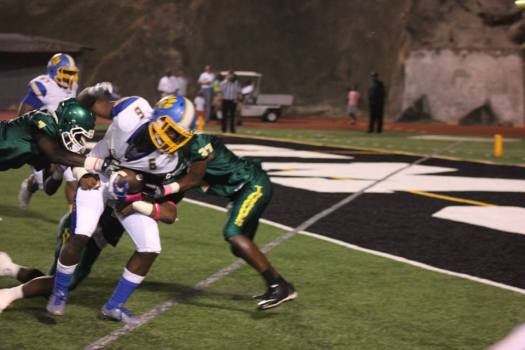 Junior running back Jammie Robinson was a key cog in the Cougars highest scoring output of the season.

Robinson scored three times while racking up 126 yards, his second 100 yard game of the year.

The tandem of senior Myles Napier and junior Patrick Felton combined for four touchdown passes on 9-16 for 206 yards.

Senior wideout Bread Armstrong was the deep threat for the Cougars, scoring on both his receptions for a 50 yard touchdown and a 48 yard score.

Crisp County got ahead early, leading 33-0 at one point in time.

Head Coach Brad Harber cited one of the reasons was special teams.

“We got three turnovers in the special teams department,” Haber said. “Any time you can do that you feel like it’s going to be a good night.”

With the success of the special teams it allowed the Cougar offense to start in favorable field position and became a contributing factor in the second key in the game — Crisp County was able to control the ground game and capitalize.

The Cougars defensively trotted out a young lineup during the game with injuries and various factors forcing some of the younger Cougars into action.

“This was the most complete game of our season up to this point,” said Harber.

Crisp County will turn their heads to Cook County next week for a match up that will have major region implications.

Cook is currently 2-0 in region, leading the Cougars by a game.

A Crisp win on Friday night allows them to control their own destiny heading into the final two games taking place at home.