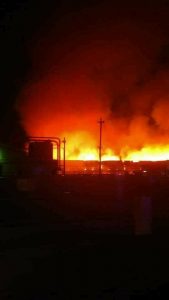 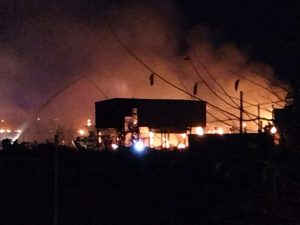 VIENNA – On Thursday, November 30 at 8:00 p.m.,  the Vienna Volunteer Fire Department responded to a call of a fire at the Old Georgia-Pacific warehouse located at 291 Ga Pacific Rd off of Highway 41 in Vienna.

Fire fighters arrived at 8:05 p.m. to find the structure was fully involved in the fire. The warehouse was not in use and the only person on scene was a guard,  no one was injured.

There were no utilities running at the site due to the building being permanently closed. The warehouse was once used for wood and sawdust storage. The structure was made of wood beams and was destroyed completely in the fire. Heavy equipment will be needed later to remove the roof for further investigation.

Fire fighters worked well into the night putting out the flames. There was still smoldering at the site early the following morning. According to Communications Director, Glenn Allen of the Office of Insurance and Safety Fire Commissioner, the cause of of fire is currently unknown and under investigation by the State Fire Marshal. If anyone has any information, please contact the Georgia Arson Hotline at 800-282-5804.