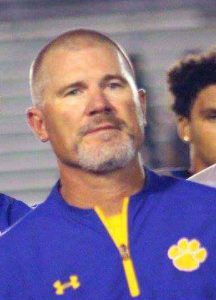 CORDELE – The Georgia Sports Alliance (GSA) and Georgia Athletic Coaches Association (GACA) have selected Crisp County Head Coach Brad Harber to coach two All Star games later this month. The President and CEO of GSA called Harber about a month ago and offered the position to be Head Coach of the West Team in the East/West All Star Game on December 23.

“It was definitely an honor to be selected because a lot of the selection process is because of your peers in the business. The good thing I’ve thought about is it brings more attention to our high school and our community. We’re going to have some players that have been selected to play in both of those games,” Harber said.

About a week later Harber received an offer from GACA to be Offensive-line Coach for the South Team in the North/South All Star game on December 28.

As Head Coach of the West Team, Harber was asked to put together the coaching staff for the game. Two weeks after being selected as Head Coach, Harber already has a full staff ready.

“Over the Christmas break sometimes it’s difficult to put together a staff during that time obviously with Christmas and family vacation,” Harber said.

“We are very proud of Coach Harber for continuing to push our football program forward. He did a good job this year and we are very excited that he has the opportunity to represent our school system at the state level through this All Star appearance,” Pate said.