The Lady Wildcats had the lead 9-7 at the end of the first quarter. Claire McGarr scored all nine points for Crisp Academy in the quarter.

A big third quarter scoring run gave the Lady Raiders a 29-19 lead heading into the fourth quarter. Southland then outscored Crisp Academy 13-5 in the fourth quarter to finish the game off for a 42-24 win. Claire McGarr was the leading scorer for the Lady Wildcats with 18 points.

In the boys’ game, the Raiders got out to a 14-10 lead in the first quarter after making four three pointers. Ravi Patel, Bobby Ray Mitchell, Griffin Gravitt and Trey Williams all scored in the quarter for the Wildcats.

The Raiders got ahead by as many as five points in the second quarter, but the Wildcats made a late 6-0 scoring run to take a 28-27 lead into the halftime break.

The teams exchanged the lead several times in the third quarter, but the Wildcats ended the quarter with a 49-47 lead. Griffin Gravitt had seven points in the quarter for Crisp Academy.

The Wildcats then used an 11-0 scoring run, led by Bobby Ray Mitchell’s seven fourth quarter points, to finish the game off for a 67-59 win. Griffin Gravitt led the Wildcats in scoring on the night with 17 points. Bobby Ray Mitchell scored a total of 15 points, while Trey Williams added 12 and Ravi Patel had nine.

Tiftarea opened the girls’ game with a 9-0 scoring run to put the Lady Wildcats behind early in the first quarter. Crisp Academy countered with a 9-3 run with five points from Kaylee Moore and four from Claire McGarr. Tiftarea closed out the first quarter with an 18-9 lead.

Ainslee Forsythe, Claire McGarr, Maddie Milani and Kaylee Moore all scored in the third quarter, but the Lady Panthers maintained their advantage 38-21 going into the final quarter.

The Lady Panthers finished the game off for a 48-28 victory after outscoring Crisp Academy 10-7 in the fourth quarter. Kaylee Moore finished as the leading scorer for the Lady Wildcats with 11 points. Claire McGarr tacked on seven points and Maddie Milani finished with six points.

The Crisp Academy boys used a big first quarter to lead them to a win over the Panthers. Trey Williams scored six points in the quarter, and five other Wildcats scored to help push Crisp Academy to a 24-9 lead at the end of the first quarter.

In the second quarter, Bobby Ray Mitchell, Griffin Gravitt and Ravi Patel combined for 13 points to keep the Crisp Academy offense going, but several three pointers by the Panthers allowed them to cut into the Wildcat lead. The Wildcats led 41-28 at halftime.

The Panthers made several threes in the third quarter to get the Wildcat lead down to 10 points, but the Wildcats finished the quarter on a late scoring run that brought their lead back up to 13 points going into the fourth quarter.

The Wildcats extended their lead out to 20 points with an 11-2 run to start the fourth quarter. Tiftarea made several late baskets to cut into the lead, but Crisp Academy prevailed by a final score of 77-63. Ravi Patel finished the game as the leading scorer with 18 points. Bobby Ray Mitchell and Griffin Gravitt added 14 apiece, and Trey Williams also finished in double figures with 10. 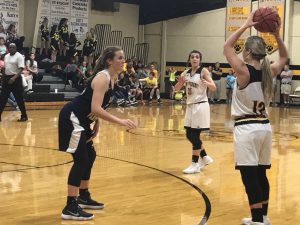