CORDELE- The Dooly County basketball teams made the short trip to take on Crisp County Friday night. The schools split the games with the Lady Cougars winning the girls’ game, and Dooly winning the boys’ game.

The Lady Cougars used a big first quarter to take complete control of the girls’ game. They outscored the Lady Bobcats 22-4 in the quarter. Jelissa Reese and Chadaya Miller each scored nine points in the quarter.

The Lady Cougars continued their strong performance in the second quarter by outscoring the Lady Bobcats 21-3. Miller and Reese combined for 13 of the 21 Crisp County points in the quarter. The Lady Cougars led 43-7 at halftime.

The Lady Cougars kept their dominant performance going in the third quarter. Jelissa Reese, Aaliyah Hardemon, Janiah White, Alexis Henderson and Diamond King all scored in the quarter for Crisp County. The Lady Cougars took a 55-19 lead into the final quarter.

Crisp County finished the game off by outscoring the Lady Bobcats 18-13 in the fourth quarter. The Lady Cougars won the game by a final score of 73-32.

For the Lady Cougars, Jelissa Reese finished with 25 points and seven rebounds, while Chadaya Miller scored 24 points and had 10 rebounds. Jashume Greene led the Lady Bobcats in scoring with eight points, and Jasmine Clark added seven.

In the boys’ game, Jar’Quavius Brown’s big night led the Bobcats to a victory over the Cougars.

The Bobcats got seven points from Brown and four points from Rashad Lucas in the first quarter. KJ Williams led the Cougars with seven points in the quarter, including a shot at the buzzer to cut the Dooly County lead down to 13-11 going into the second quarter.

Jar’Quavius Brown scored eight more points for Dooly County in the second quarter to help the Bobcats to a 29-25 halftime lead. Malik Hall and Quay Walker combined for 10 of the Cougars’ 14 points in the quarter.

Dooly County extended their lead in the third quarter by outscoring the Cougars 20-17. Brown put up seven more points for the Bobcats in the quarter, with Bo Lawson and Rashad Lucas chipping in with four points apiece. Malik Hall scored eight points in the quarter for the Cougars, while TJ Ming added five. Dooly led 49-42 entering the fourth quarter.

Jar’Quavius Brown finished the game with 32 points and seven rebounds for the Bobcats. Rashad Lucas contributed with 10 points, and Bo Lawson finished with eight points and 10 rebounds.

Malik Hall led the Cougars in scoring with 20 points, while TJ Ming finished with 11 and KJ Williams added nine.

The two teams will matchup again next month in Vienna on January 13. 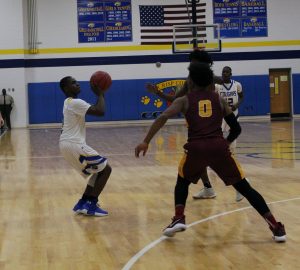 Trey Griffin attempts a shot for Crisp County, as Bo Lawson (0) closes out on defense.