CORDELE – Cadet Lieutenant Colonel Nathan Miles of the Crisp County High School (CCHS) JROTC acquired his third nomination to West Point. Out of four possible nominations, Miles has three: one from Senior Army Instructor in JROTC at CCHS Lt. Col. Kenneth D. Kirk, another from US Senator, Johnny Isakson and the most recent one from US Representative, Sanford Bishop.

Each one of these nominations gives Miles a better chance of actually being selected. Just like any university, West Point still has to go through the admissions process of selection.

“Based on his grades, interview skills, SATs and ACTs, we are very confident that he will be selected,” Lt. Col. Kirk said.

“No other position in the unit will get you anything. Miles has been in the program for four years and holds the distinction of being the commander right now,” Lt. Col. Kirk said.

Two experiences that help qualify Miles even more are his participation in both West Point’s leadership program called The Summer Leaders Experience (SLE) and the American Legion Boys State Convention. Miles was involved in both this past summer 2017.

West Point’s SLE program is highly competitive with normally 6,000 applicants and only 1,000 attendees selected. The SLE program allows high school juniors a week to experience life as a

“They do a mock General Assembly, you go through all of the processes while you’re there of getting yourself elected, put on committees, writing bills and things like that. West Point considers that a big plus,” Lt. Col. Kirk said.

If Miles is accepted, he will begin at West Point in fall semester 2018. West Point offers a summer session where they bring in who they call the “Plebs” and get them ready for life at West Point right before school starts in the fall.

Miles will find out if he’s been accepted in early spring 2018. He’s met many of the other requirements and Miles has one extra chance with each of his three nominations. 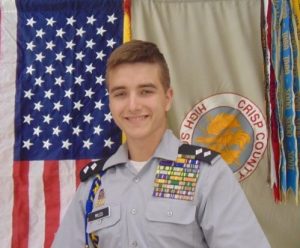