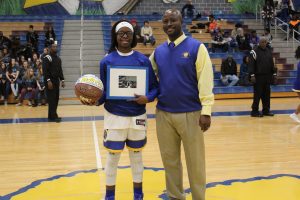 CORDELE- The Crisp County basketball teams opened up region play against Cook County on Friday night. Both games were close throughout the duration, as Cook County won the girls’ contest, and Crisp won the boys’ game.

Jelissa Reese scored six points in the first quarter, while Chadaya Miller and Alexis Henderson added a bucket apiece. The Lady Cougars led 10-8 at the end of quarter number one.
Cook County took control of the lead in the second quarter by outscoring the Lady Cougars 9-6. Reese, Aaliyah Hardemon, and E’lacious Holt each scored for Crisp in the quarter, but the Lady Hornets led 17-16 at halftime.

Cook County opened the third quarter with a 10-3 scoring run to take a 27-19 lead about halfway through the third period. The Lady Cougars scored the next ten points to retake the lead briefly. Reese, Miller, Hardemon and Janiah White all scored for Crisp during the 10-0 run. The Lady Hornets scored the final points of the third quarter to tie the score at 29 entering the fourth quarter.

Chadaya Miller put the Lady Cougars back in front with the first points of the final quarter, but Cook County countered with the next five points to go back in front 34-31. The teams traded points before Jelissa Reese hit a three-pointer to give Crisp County the lead 37-36 halfway through the fourth quarter.
Alexis Henderson and Deikya Troup then scored to put the Lady Cougars ahead 41-38 after Cook made two free throws. The Lady Hornets then went on a 10-1 run to finish the game for the win. Cook County won by a final score of 48-42.

Jelissa Reese was the leading scorer for the Lady Cougars with 17 points. She also had four rebounds and five steals. Chadaya Miller finished with eight points, six rebounds and seven steals, and Alexis Henderson had six points and six rebounds.

The Hornets scored the first points of the boys’ game to go up 2-0 but the Cougars replied with a 7-0 run with a bucket from Malik Hall, and two scores from Alex Harvey, including a three-pointer. Cook County answered with a 9-2 run to take an 11-9 lead, but TJ Ming and Trey Griffin each scored late in the quarter to put Crisp County in front 13-11 going into the second quarter.

The Hornets took advantage of several trips to the free throw line in the second quarter. They briefly took the lead late in the first half before KJ Williams hit a big three-pointer just before halftime to put the Cougars back in front. Williams had seven points in the quarter to help Crisp retake the lead 24-23 at the half. TJ Ming and Malik Hall added a bucket apiece in the quarter.

Alex Harvey started the second half with a bucket and a free throw to put the Cougars up 27-23. The Hornets then took the lead at 30-29 after a 7-2 run. Another three by KJ Williams put the Cougars back in front, and RJ Chambliss scored shortly after to put Crisp County up 34-30. Cook hit back with the next four points to tie the score back up, but Alex Harvey came up with another score and was fouled on the shot. The free throw that followed put the Cougars ahead 37-34, but the Hornets cut the lead to one with the final points of the third quarter.

The teams traded scores for most of the fourth quarter until the Cougars eventually ended up with a 53-45 lead late in the game. Crisp County got scores from KJ Williams, Malik Hall, PJ Coleman, Alex Harvey and RJ Chambliss in the quarter. Cook County hit a couple of late three-pointers and cut the Crisp lead down to 55-53 with less than six seconds to go in the game, but Chambliss knocked down two free throws to put the game out of the Hornets’ reach. The Cougars won by a final score of 57-53.

Alex Harvey led the Cougars in scoring with 15 points, while also grabbing five rebounds and dishing out three assists. Malik Hall finished with 12 points and six rebounds, and KJ Williams was also in double figures with 12 points. RJ Chambliss ended up with eight points and six rebounds, and TJ Ming put in a solid performance defensively with eight rebounds and three blocks.

After their region games Tuesday night at Worth County, the Crisp County teams will host Dougherty County for another region matchup on Friday. 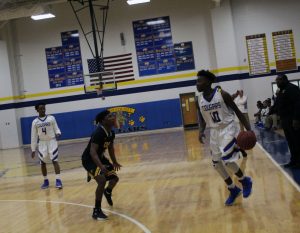 KJ Williams (10) tries to create some space in an attempt to shoot the ball as TJ
Ming (4) looks on.