CORDELE- The Crisp County basketball teams hosted region rival Dougherty County on Friday night for an important game in the region standings. Dougherty County picked up the win in both the girls’ and boys’ games.

The Lady Cougars had a 14-11 lead at the end of the first quarter led by Jelissa Reese and Aaliyah Hardemon. The two combined for 12 of the 14 Crisp points in the quarter, while Dekiya Troup scored the other two points.

The Lady Trojans then took control of the game in the second quarter by outscoring the Lady Cougars 15-6. Hardemon, Janiah White and Diamond King all scored for Crisp in the quarter. Dougherty County led 26-20 at halftime.

Dougherty then extended the lead in the third quarter by outscoring the Lady Cougars 17-10. The Lady Trojans led 43-30 at the end of the quarter.

After falling behind 52-36 about halfway through the fourth quarter, the Lady Cougars made a 9-0 run to get back into the game with just a few minutes remaining. Dougherty ultimately won the game, however, after pulling back away late. The Lady Trojans won by a final score of 65-51.

The leading scorer in the game for the Lady Cougars was Jelissa Reese with 21 points. Aaliyah Hardemon finished the game with 10 points.

The Trojans started the second quarter with a scoring run that put them ahead 24-14. The Cougars responded by outscoring Dougherty 13-7 for the remainder of the quarter. Coleman, Ming, KJ Williams, Malik Hall and L’kiem Smith all pitched in on the scoring run for the Cougars. Dougherty had a 31-27 lead at halftime.

The Trojans extended their lead back out to eight points going into the fourth quarter by outscoring the Cougars 14-10 in the third. KJ Williams and PJ Coleman combined for eight of the 10 Crisp County points in the quarter. Dougherty County had the lead at 45-37 entering the fourth quarter.

The Trojans opened up the final quarter with a three-pointer to go up by 11. KJ Williams then answered with a three-pointer of his own, and scores by Malik Hall, TJ Ming and Alex Harvey cut the Trojan lead to 48-46. Dougherty then finished the game on a 14-4 scoring run to stop the Cougar comeback attempt.

The Crisp teams then played at Dooly County on Saturday night. The Lady Bobcats defeated the Lady Cougars, while the Cougars won convincingly over the Bobcats in the boys’ game.

The Lady Bobcats won the girls’ game by a final score of 60-55 after outscoring the Lady Cougars 20-6 in the fourth quarter. Jelissa Reese and E’lacious Holt were the leading scorers for the Lady Cougars with 11 points each. Reese also grabbed nine rebounds in the game. Diamond King finished the game with a double-double with 10 points and 10 rebounds. Alexis Henderson ended the game with nine points, five rebounds and three steals.

The Cougars defeated the Bobcats in the boys’ game 85-53. Dooly County led 18-17 at the end of the first quarter, but the Cougars outscored the Bobcats 68-37 over the final three quarters. Shamon Zanders led the Bobcats in scoring with 16 points, while Jarquavius Brown and Zeff Felton each had 10.

KJ Williams finished as the leading scorer for the Cougars with 20 points. Alex Harvey finished with 17 points and five assists, and RJ Chambliss helped out with 13 points. TJ Ming finished with a double-double, recording 11 points and 11 rebounds. 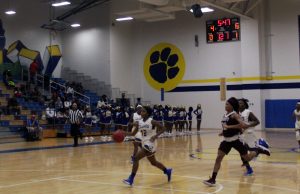 Aaliyah Hardemon leads the fast break for the Lady Cougars in the game vs Dougherty. 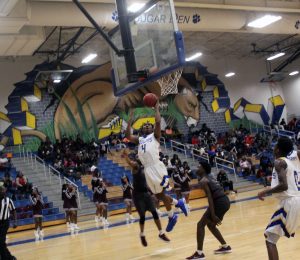 TJ Ming makes a layup for Crisp County in the game against Dougherty County.