CORDELE- The Crisp County basketball teams hosted Monroe on Tuesday night for important region games. The Monroe teams were able to pick up the wins in both the girls’ and boys’ contests.

The Lady Cougars built a lead early on in their game before the Lady Tornadoes put together a run to take the lead before halftime. Monroe had a 27-21 lead at the half.

Aaliyah Hardemon and Jelissa Reese scored consecutive baskets for Crisp County to start the second half to cut the Monroe lead to two. Monroe then went on an 18-4 scoring run for the remainder of the third quarter to take control of the game. The Lady Tornadoes led 49-29 entering the fourth quarter.

KJ Williams got the Cougars off to a good start in the first quarter with a quick three-pointer. The teams traded small scoring runs throughout the quarter, and Monroe led 21-17 going into the second period. Williams, Alex Harvey, RJ Chambliss, Trey Griffin and PJ Coleman all scored for Crisp in the first quarter.

The Tornadoes extended their lead in the second quarter by outscoring the Cougars 12-11 in the period. Harvey, Coleman, Griffin, and Bread Armstrong each had a basket in the quarter for the Cougars. Monroe led at halftime by a 33-28 score line.

The Cougars started the third quarter with a 15-7 scoring run that gave them a 43-40 lead about halfway through the quarter. KJ Williams, TJ Ming, Alex Harvey, RJ Chambliss and PJ Coleman all scored during the run. Monroe then retook the lead shortly after with a big scoring run. The Tornadoes had a 51-46 lead going into the final period.

Monroe got the first score of the final quarter to extend their lead to 53-46, but Harvey and Williams combined to hit three straight three-pointers to put the Cougars back in front 55-53. Monroe answered with a 9-0 scoring run to get back in front 62-55.

Williams knocked down another three-point shot to keep the Cougars within striking distance about halfway through the fourth quarter, but the Tornadoes outscored the Cougars 14-6 for the remainder of the quarter. Monroe picked up the region win by a final score of 76-64.

Williams led the Cougars in scoring with 17 points, and he also grabbed six rebounds. Alex Harvey was next with 12 points and four assists. RJ Chambliss and PJ Coleman finished with nine points apiece, and Trey Griffin scored eight.

After their region games Friday night at Cook County, the Cougars and Lady Cougars will take a short break from region play as they host Turner County Saturday night starting at 6. 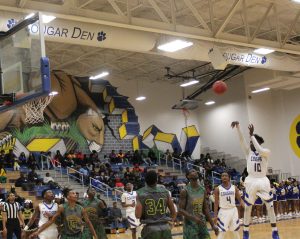 KJ Williams pulls up for a jump shot. 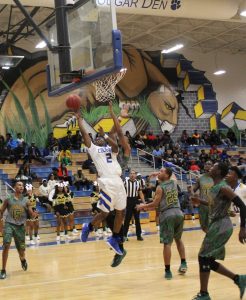 Trey Griffin gets behind his defender for a layup.