CORDELE- The Crisp Academy basketball teams hosted region opponent Terrell Academy for games Friday night. The Lady Eagles defeated the Lady Wildcats, but the Wildcats came up with the victory in the boys’ game.

Crisp Academy extended their lead going into the halftime break after outscoring the Lady Eagles 14-11 in the second period. McGarr and Kaylee Moore each scored six points in the quarter, and Ainslee Forsythe scored the other two points for Crisp. The Lady Wildcats led 21-15 at the half.

Kaylee Moore started the second half with a three-pointer to extend the Crisp Academy lead out to nine points, but the Lady Eagles finished the third quarter on a 12-5 scoring run to bring the score to 29-27 in favor of the Lady Wildcats.

The Lady Eagles then started the fourth quarter on a 12-1 scoring run to take a 39-30 lead late in the game. Maddie Milani scored a basket for the Lady Wildcats with about two minutes to play in the game, but Terrell was able to finish the game off for the region win.

Claire McGarr led the Lady Wildcats in scoring with 14 points and Kaylee Moore finished with nine.

The Wildcats took complete control of their game in the first quarter by outscoring the Eagles 23-5. Landon Jacobs opened the game with a three-pointer, and Ravi Patel then knocked down two more threes for the Wildcats. Nathan Willis, Bobby Ray Mitchell, Griffin Gravitt, and Trey Williams all scored for the Wildcats in the quarter as well.

Crisp Academy added to their lead in the second quarter as they outscored Terrell 16-11 in the period. Willis, Gravitt, Patel, and Mitchell all contributed with scores in the quarter. The Wildcats led 39-16 at halftime.

Eight different Wildcats scored in the fourth quarter, including Billy Hardin and Spencer Stubbs, as Crisp Academy finished the game out for a 78-51 victory.

Ravi Patel finished as the leading scorer in the game for Crisp Academy with 22 points. Bobby Ray Mitchell and Nathan Willis each finished the game with 14 points, and Landon Jacobs also ended the game in double-figures with 10. Trey Williams ended up with eight points, and Griffin Gravitt pitched in seven.

The Crisp Academy teams travel to Perry to take on Westfield tonight. The Lady Wildcats will tipoff at 6:30, with the boys’ game to follow. 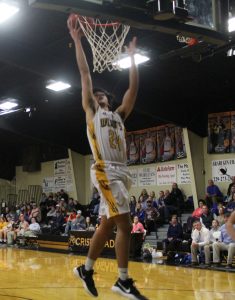 Ravi Patel scores for the Wildcats. 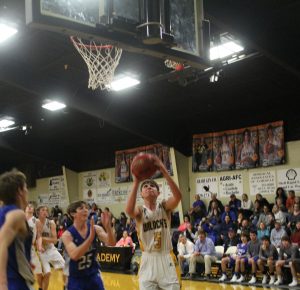 Trey Williams gets behind the defense for a layup.