CORDELE- The Crisp County basketball teams hosted neighbors Turner County for a non-region matchup on Saturday night. The Rebels and Lady Rebels came up with the wins in very competitive contests.

Turner County started the girls’ game off with a 10-2 scoring run to put the Lady Cougars behind early. Jelissa Reese scored a bucket and a free throw to get Crisp County’s offense going. Janiah White, Alexis Henderson and E’Lacious Holt all tacked on scores for the Lady Cougars in the quarter. The Lady Rebels were ahead 18-10 at the end of the first period.

Turner County scored the first seven points of the second quarter to take a commanding 25-10 lead. The Lady Cougars then put together a 10-0 scoring run to pull themselves back into the game at halftime. Reese scored four of the 10 points, while Diamond King, Janiah White and Dekiya Troup each chipped in with a basket. Turner led 26-20 at the half.

The Lady Cougars tied the game early in the third quarter after Aaliyah Hardemon knocked down a three-point shot. The teams then swapped the lead back and forth over the next few minutes before the Lady Rebels closed the period on a 10-0 scoring run. Turner County had a 43-37 lead entering the final quarter.

The Lady Rebels scored the first point of the fourth quarter on a free throw, but Aaliyah Hardemon hit another three to keep the Lady Cougars within striking distance. After another score from Turner, Alexis Henderson connected on three jump shots in a row to cut the Rebel lead to 48-46. The Lady Rebels scored shortly after to pull back ahead by four, but Hardemon and Reese scored back-to-back buckets to tie the score at 50.

The Lady Rebels retook the lead on a free throw by Zakiyah Office, but Aaliyah Hardemon put the Lady Cougars ahead with her third three-pointer of the game. Mya Byrd tied the score for the Lady Rebels shortly after, and Aerial Hamilton tacked on another basket shortly after to put Turner back in front with just a few seconds left. The Lady Cougars tried to set up a play to send the game into overtime, but they were unable to get a shot off, and Turner County knocked down a couple of free throws to finish the game for a 57-53 win.

Jelissa Reese led the Lady Cougars with 17 points, while also recording five assists, five rebounds and six steals. Aaliyah Hardemon and Alexis Henderson both finished the game with 11 points. Mya Byrd led the Lady Rebels with 22 points, and Zakiyah Office was next with 15.

Keishon Franklin got the Cougars on the board first in the boys’ game. Turner County then went on an 11-2 run to build a seven-point lead. L’kiem Smith scored a basket, and KJ Williams hit a three-pointer to bring the score to 11-9 in favor of Turner, but the Rebels extended the lead back out to seven with a late three-point shot and another score. The Rebels led 16-9 at the end of the first quarter.

Alex Harvey, KJ Williams and Willie Poole led Crisp County on a 12-3 scoring run that helped the Cougars retake the lead at 20-19. The Rebels outscored Crisp 12-7 for the remainder of the second period to take a 31-28 lead into halftime.

Trey Griffin hit a three-point shot early in the third period to bring the Cougars to within one-point of the Rebel lead. Turner answered with an 11-2 scoring run to pull their lead out to 43-33. Willie Poole provided a much-needed spark for the Cougars late in the quarter with five quick points off the bench. KJ Williams then hit a long three-pointer at the buzzer to cut the Turner lead to 45-41 going into the final period.

The Rebels opened the fourth quarter on a 6-1 scoring run to stretch the lead out to 51-42. Williams got the Cougars back in the game with two free throws and another crucial three-pointer. The teams traded scores for the next couple of minutes until the Cougars found themselves down 55-52 with possession of the ball late in the game. They finally found a decent chance to send the game into overtime, but they could not find the equalizing score. Turner County knocked down a free throw with almost no time, and they were able to hold on for the win 56-52.

KJ Williams led the Cougars in scoring with 21 points. He also had eight rebounds, three steals and two blocks. Alex Harvey finished the game with 12 points and four steals, while Willie Poole contributed seven points, and Trey Griffin ended up with six. Kemone Knight led the Rebels in scoring with 13 points.

The Crisp County teams will play their final two home games of the season this weekend, as they host region rivals Worth County on Friday night starting at 6, and Wilcox County Saturday night. 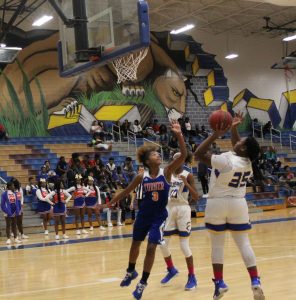 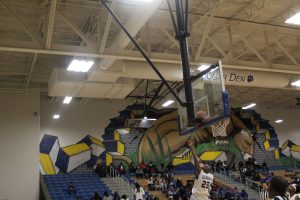 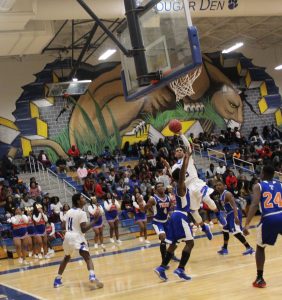